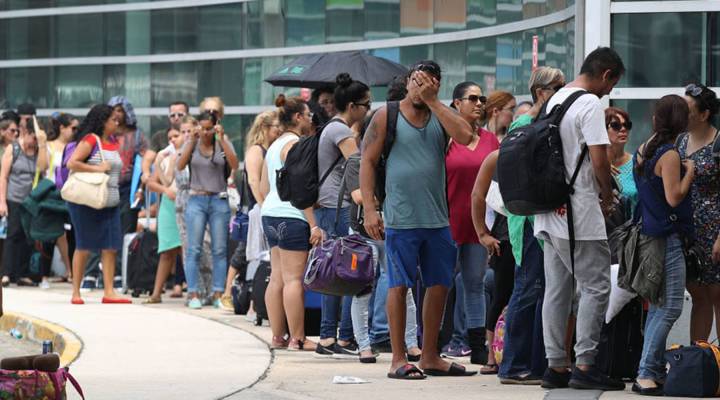 COPY
People wait in line to get a flight out of the Luis Munoz Marin International Airport as they try to return home or escape the conditions after Hurricane Maria on September 26, 2017 in San Juan, Puerto Rico.  Joe Raedle/Getty Images

People wait in line to get a flight out of the Luis Munoz Marin International Airport as they try to return home or escape the conditions after Hurricane Maria on September 26, 2017 in San Juan, Puerto Rico.  Joe Raedle/Getty Images
Listen Now

On a crisp fall day, Jenny Nieves put on a borrowed winter coat and went to pick up her new benefits card – for “food stamps, Medicaid, [and] some cash too,” she said. Nieves and her 14-year-old son have been in New York for just over a week. They’re living with her niece in a one-bedroom apartment in the Bronx. She left her home in Luquillo, about 45 minutes from San Juan, because of the lack of power and water, the empty store shelves and long lines for food. Her son is home-schooled, and he couldn’t do any of his online coursework without the internet.

Nieves taught second grade in Puerto Rico, but she’s not licensed to teach in New York. She took a spot in line at the city’s Human Resources Administration and started chatting in Spanish with the people around of her. “I’m already meeting people here who are from Puerto Rico also, like me,” she said.

In addition to these benefits, friends and family raised $1,200 for Nieves online. When asked if she’ll try to find work in the city or how long she might say in New York, Nieves shrugs. “I could be here another month, I could be here 3 months, 5 months,” she said. “I’m just not sure yet.”

Even before the storm, Nieves said Puerto Rico’s poor economy and schools made her think about moving to New York, where she grew up before going to live with her parents in Puerto Rico eight years ago. This might push her to make the leap.

The Center for Puerto Rican Studies at Hunter College estimates that nearly half a million Puerto Ricans might leave the island in the two years after Maria — 14 percent of its population. “In other words, Puerto Rico will lose the same population in a span of a couple of years after Hurricane Maria as the island lost during a prior decade of economic stagnation,” according to a research brief written by the Center’s Edwin Meléndez and Jennifer Hinojosa.

Areas of the country that already have large Puerto Rican populations are preparing for large inflows. Florida’s governor recently said his state has already received more than 73,000 Puerto Ricans. New York has opened a Hurricane Service Center in the Bronx to give evacuees from Puerto Rico, Florida, and Texas a centralized place to tap into city and nonprofit services. “We’re hearing mostly that people are looking for long-term employment,” said Johanna Conroy, director of Human Services for New York City Emergency Management. “They want to make sure that their kids are enrolled in school. Some people came up here with nothing but what they were wearing, so we’re hearing need for winter clothes.”

Conroy said the center is operating near capacity and processed about 300 families in its first week.

One thing New York isn’t able to offer is much affordable housing. Mayor Bill de Blasio said Puerto Ricans are welcome here, but cautioned them against coming unless they have family or friends to stay with.

Outside the center, Leslia Rodriquez loaded her elderly parents into a car after spending a couple hours registering them for Medicaid and other services. Her dad was hospitalized with bronchitis just two days after arriving in New York. “The doctor explained to me is that it wasn’t bacterial bronchitis, it was bronchitis caused by the fumes of the generator,” she said.

She’s lived in New York for almost 20 years and said she’s glad to be able to take her parents in, but it’s been “drastic.”

“They need a lot of help right now,” she said. “I want to be able to provide everything that they need. They having a lot of anxiety.” She’d like to reassure her parents they’ll be back home for Christmas, but at this point, she’s really not sure.