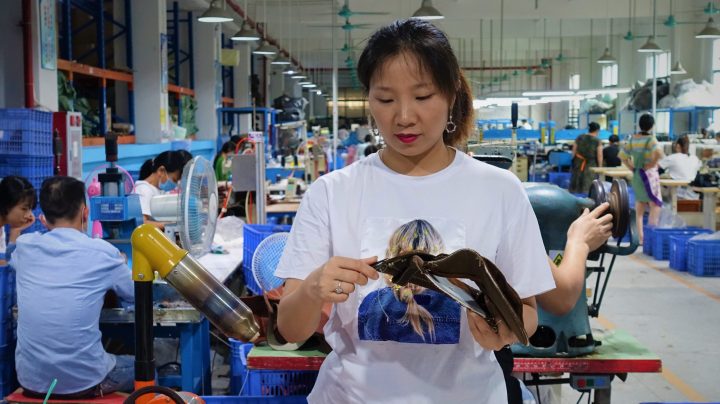 COPY
A worker in a southern China shoe factory. Many Chinese manufacturers say they are making goods Americans no longer want to produce. Charles Zhang/Marketplace

A worker in a southern China shoe factory. Many Chinese manufacturers say they are making goods Americans no longer want to produce. Charles Zhang/Marketplace
Listen Now

China produces 28% of the world’s manufacturing output. The U.S. produces about half that. While China’s manufacturing sector has increased as a percentage of its gross domestic product, U.S. manufacturing’s share of real GDP has decreased slightly over the past decade, though it’s hovered between 11 and 14% since 1947. The fortunes of manufacturing in both countries have been a source of anxiety for some in the U.S., and in part fueled the Trump administration’s trade war that President Joe Biden has inherited. Marketplace’s Jennifer Pak and Sabri Ben-Achour report on what the manufacturing relationship looks like on the ground and how we got here.

Elizabeth Taylor is one of those consumers. She runs her own business in Alta, Iowa, cleaning homes and medical offices. She uses an app called Wish, which serves as a direct line to vendors in China. Taylor has ordered a range of things, from a projector to a solar panel.

The main reason she keeps coming back? “Affordability. They got pretty good prices!”

Taylor paid $6 for the spaceman earrings, plus another $2 for shipping from China. The only catch is that items could take weeks, even months, to arrive since Chinese vendors on Wish find the most inexpensive route to send packages.

How are products made so cheaply, and how does China make so many of them? The “secret sauce” of Chinese manufacturing, as some call it, has a few ingredients.

Labor is a key part of China’s manufacturing strength.

Marketplace visited the Wish vendor that Taylor bought her earrings from. The firm, Vastsee, is located in an industrial zone of Shanghai. Staff members wear their winter coats because there is no indoor heating.

Still, for warehouse manager Zhou Huilian, the job is pretty good compared to her previous employment.

“There’s no overtime required. When I used to work in factories in Guangdong [in southern China], I had to work 12- to 14-hour days, and the overtime pay was low,” she said.

Zhou also works Mondays to Saturdays. A six-day workweek is common in most industries in China.

It is illegal for workers in China to set up independent unions. At the same time, workers like Zhou have said they don’t always mind overtime because it offers the chance to earn more. Work is the only reason Zhou left her home in the fields of central Hunan province for Shanghai.

Zhou earns just over $4 per hour, while the staff who packed and sent the spaceman earrings to Taylor earn $3 an hour.

By comparison, Taylor, the buyer of those earrings, makes $25 an hour.

The difference in wages is a key reason that so many manufacturing jobs were shifted from the U.S. to China. By some estimates, 2.4 million American jobs were lost to China over 12 years (though other estimates say the U.S. gained more jobs than that in services).

The gap in wage levels isn’t just about differences in labor standards or working conditions. It’s also a product of the wealth gap between the U.S. and China. David Autor, professor of economics at MIT, explained that Chinese labor is cheaper than U.S. labor for the same reason labor in any developing country is going to be cheaper.

“Where people are poorer, their time has a lower price in dollars — they’re willing to work for less money because their outside options are much weaker, and that’s the way countries develop,” he said. Including the U.S.

“Our wages were quite a bit lower 100 years ago too. Nobody would have said it’s unfair, they need to be what the minimum wage set in the 21st century is,” Autor said.

It’s not simply China’s low labor costs that made the country the manufacturing behemoth it has become. It’s also the sheer size of the labor pool.

Starting in the early 1980s, an estimated 400 million people migrated from rural areas, according to Autor. Many left behind young children, spouses and elderly parents to work in factories hundreds of miles away.

Whereas a smaller country would have burned through its supply of people willing to work for low wages, China could reach deeper and deeper into its interior for more workers as wages gradually rose.

“So you had for multiple decades this almost inexhaustible supply of cheap labor,” Autor said.

Of course, many countries have cheap labor. China, however, added something that many others have not successfully brought to bear: a state relentlessly focused on development policy, according to Yi Wen, an economist with the Federal Reserve Bank of St. Louis and author of “The Making of an Economic Superpower: Unlocking China’s Secret of Rapid Industrialization.”

Infrastructure has to be capable of supporting the efficient export of goods, and the government is needed to facilitate this, according to Wen. China’s government invested heavily in infrastructure and building markets to support domestic industries.

To the question, why doesn’t the U.S. produce certain things — specifically, cheap goods like face masks or other personal protective gear, to the alarm of many Americans during the pandemic — labor is one part of the complex answer. The U.S. is a wealthy country, and labor is expensive — too expensive to competitively make cheap labor-intensive products.

“Once you move up the ladder of industrialization, you move to the frontier of technology, but the lower bottom level of technology you outsource,” he said.

This is happening in China too. Wages are rising as the country’s economy advances.

Labor-intensive shoe and clothing manufacturing has shifted to lower-cost countries like Cambodia and Vietnam. The manufacturers that can’t afford to move cope with machines.

“A job that required 100 workers before can now be done with 20 people,” said Vastsee’s general manager, Bai Haitao. “Each worker’s salaries might have doubled, but the rest of the work is replaced by robots.”

“The U.S. still has a big manufacturing sector. However, they only produce high-tech such as airplanes [and] computer chips,” Wen said.

The actual inevitability of the loss of low-end manufacturing and the jobs accompanying it fuels a tense debate in the U.S.

“America’s policy towards industrial manufacturing has been very passive and in many cases has skewed in favor of seeing those types of manufacturing jobs and industries get moved offshore,” said Benjamin Shobert, author of “Blaming China: It Might Feel Good but It Won’t Fix America’s Economy” and a senior associate at the National Bureau of Asian Research. He said U.S. policymakers were content to see America shift toward more service jobs and should have done more to retain manufacturing capacity — they allowed China to enter the WTO too quickly, for example. That lowered trade barriers and swiftly exposed U.S. manufacturers to international competition.

But others argue the U.S. held on to that type of manufacturing, and the jobs associated with it, longer than expected. “We were making things advanced countries stopped making a long time ago,” Autor said. “Textiles, toy assembly, commodity furniture — not the bespoke stuff — plastics and rubber products. Low-value-added items that you wouldn’t expect to find produced in high-income countries.”

In China, business owners said they’re merely picking up work that people in the U.S. don’t want to do, while sustaining the American lifestyle.

“We are subsidizing Americans with cheap and good products,” Vastsee’s Bai Haitao said.

Another component of China’s manufacturing capability is how it has organized production into industrial clusters. Multiple parts of the supply chain are located close to one another, wrapped up in dense nodes of efficiency.

There are entire Chinese towns that manufacture only zippers, trash bins or lingerie.

Zhou Xiaohuan, who is not related to Vastsee warehouse manager Zhou, co-owns a firm that manufactures charging cables sold on e-commerce sites Wish and Amazon. The U.S. accounts for 40% of his firm’s total sales.

“The reason Chinese products are cheap for American customers is because of China’s concentrated supply chain and high efficiency. From start to finish, a factory can mass-produce a product within two weeks,” he said. “Our most basic cables can sell for pennies apiece.”

But Zhou said he can still make double-digit profits by taking bigger orders.

“Chinese manufacturers are not artificially suppressing their prices,” he said.

That is disputed by many outside China.

“Chinese companies have been accused of receiving unfair subsidies and engaging in dumping for decades,” pointed out Scott Kennedy, senior adviser at the Center for Strategic and International Studies. Hundreds of WTO cases, many of them successful, have been brought against China by the U.S. and other countries alleging unfair support or anti-competitive practices.

“The Chinese state, federal and local, provide an amazing amount of support to Chinese producers,” he said. That can include free land, cheap capital, loans one may not have to pay back if things go wrong, guaranteed government purchasing and tax holidays.  Meanwhile, regulations and other barriers keep some goods from abroad from competing in China. The subsidies allow producers to sell at cheaper prices outside China, according to Kennedy.

“The China export machine is [based on] both comparative advantage and an amazing amount of skilled labor and manufacturing clusters, but it’s also these unfair trade practices, the state support, the protected home market and the dumping abroad,” he said.

As China becomes wealthier, there’s a fear that the same model that enables high-volume, low-cost production is being applied to high-end manufacturing and high-tech industries.

“I’m not especially worried that my tennis sneakers are made in China,” economist Autor said. “I am concerned about the future of the aircraft industry, the telecommunications sector, the automotive sector, power-generation sector. These things I’m really worried about.”