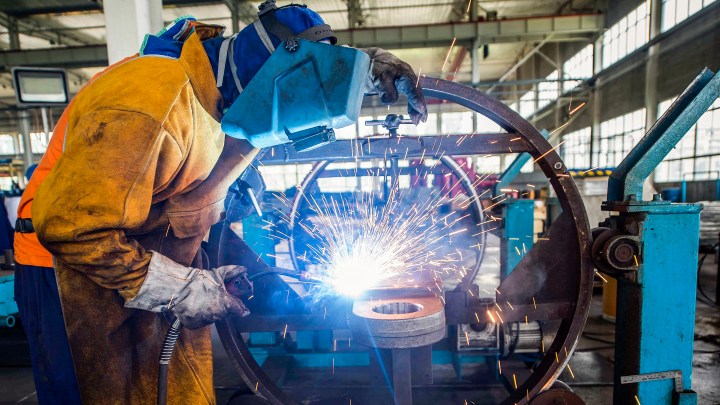 COPY
Chad Bown, senior fellow at the Peterson Institute for International Economics, does not think the trade war with China has been worth it in terms of how much it has actually cost Americans. STR/AFP via Getty Images

Chad Bown, senior fellow at the Peterson Institute for International Economics, does not think the trade war with China has been worth it in terms of how much it has actually cost Americans. STR/AFP via Getty Images
Listen Now

Thursday marks the final evening of the Republican National Convention, and President Donald Trump is expected to accept his party’s renomination with a speech from the White House.

The president has made ending reliance on China a key pillar of his second-term platform, and over the past four days, RNC speakers, including the vice president and secretary of state, have reiterated that call.

Chad Bown, senior fellow at the Peterson Institute for International Economics, is skeptical of the president’s goal to bring 1 million jobs back from China, though. The following is an edited transcript of his conversation with the BBC’s Victoria Craig on the global edition of the “Marketplace Morning Report.”

Victoria Craig: President Trump’s platform that he’s put on his reelection website pledges to bring back a million manufacturing jobs from China. Is that possible? Can he do that?

Chad Bown: I think it’s highly unlikely. It’s hard to see what that would mean in terms of, you know, kind of what industries, and the numbers are just astronomical. And, you know, with trade, that’s just not really how that works.

Craig: Is there a realistic number that he could be targeting to bring back?

Bown: No, not really. I mean, I think we’ve seen President Trump impose a lot of tariffs on China. That may mean that, all of a sudden, Americans start to buy things from countries outside of China because now it’s more expensive. If you want to buy something from China, it’s 25% more expensive because of those tariffs. So we may see more purchases from Mexico or Vietnam, and some of [that] buying may actually come from the United States. But if, all of a sudden, we start buying from, you know, American suppliers, that’s not necessarily more jobs in total. That may mean more jobs of a certain type. But, you know, before the pandemic hit, we were already at full employment. And so I think it’s just — this is not how trade works. It’s not really a job creation kind of thing.

Craig: So the trade spat, which caused higher tariffs, as you mentioned, was one way I think the administration might have hoped to encourage companies to bring some of those jobs from China back to America. But is the reality, though, that companies have found workarounds for those higher costs that the tariffs have brought? And instead of moving jobs to America, they’ve moved jobs to other places in Asia, for example?

Bown: So they might move jobs to Asia, reorient their supply chains that way. They might make things using robots and machines and technology, as well. And, so, it’s not as simple as just saying, we’re going to put tariffs on China and all of a sudden a lot of American companies are going to start producing things here in the United States that are all of a sudden going to create lots and lots of jobs. It’s just not how things work.

Craig: In the end, as you say, because there’s been such as a shift to automation in manufacturing, will the number of humans working in factories ever really go back globally to where it once was? Or is manufacturing just a target that Trump maybe should think about focusing on something else?

Bown: I think there is a big argument there. Even in a country like China, it’s sort of reached peak manufacturing employment. And over the last number of years, even China has had its, you know, number of workers that are actually employed in manufacturing decline. This is just a technological phenomenon we’re seeing taking place globally. There’s going to be fewer and fewer workers, more and more automation. And it’s really not what the future hasn’t in store for us.

The costs of the trade war with China

Craig: So what should the Trump administration be targeting in its battle with China, if not manufacturing jobs? Should it be focused on IP theft, for example?

Bown: Well, I mean, I think there is the question of should there be a trade war with China in the first place? You know, I think that the things that are most concerning with China in the economic sphere are things like China’s system of subsidies, its state-owned enterprises. It has these large state-run companies that get a lot of funding from the Chinese government that many folks think presents an unfair, you know, an unlevel playing field. So those are the kinds of things that you’d want to have fixed. Yes, China does also need to improve its protection of intellectual property — not just for Americans and Westerners’, foreigners’ intellectual property, but also to create better systems for innovation for Chinese people, as well. So those are the things that I would focus on. But, you know, there is this big question in the economic space whether all of this trade war and confrontational rhetoric is really worth the trouble that the Trump administration has put us through.

Craig: And what are your thoughts on that? Is it worth the trouble?

Bown: Well, I really don’t think so. You know, there have been tremendous costs to the American economy over the last two or three years. You know, we’re actually seeing that in the convention. For every potential benefit of tariffs, we have China retaliating with tariffs of their own. We had the example of a lobster fisherman from Maine. And Maine is suffering, in part, because China has retaliated by imposing 25% tariffs on American lobster. And so they’ve lost a huge market for their industry. And that’s the consequence of a trade war. It’s not just a one-sided thing. China has responded in kind, and that’s been costly for lots and lots of Americans.

Craig: Are there wins that you think the Trump administration should be focused on in this campaign or jumping off points that if Trump should win a second term, that he could focus on in the next four years?

Bown: Well, I think there is a lot to do in terms of rebuilding trade relationships with lots and lots of different countries. But there have been, unfortunately, very few signs coming out of the Trump administration over more than three years that they have any interest in doing so. You know, obviously, they’ve created a huge confrontation with China, but even traditional trade and economic allies — Canada, Europe, Japan — the Trump administration has spent most of their time confronting them and starting, you know, sort of mini trade battles with them as well. So there’s a lot of work to be done, but it doesn’t seem to me that it’s the natural inclination of a Trump administration, at least through a first term, to actually push in that direction.