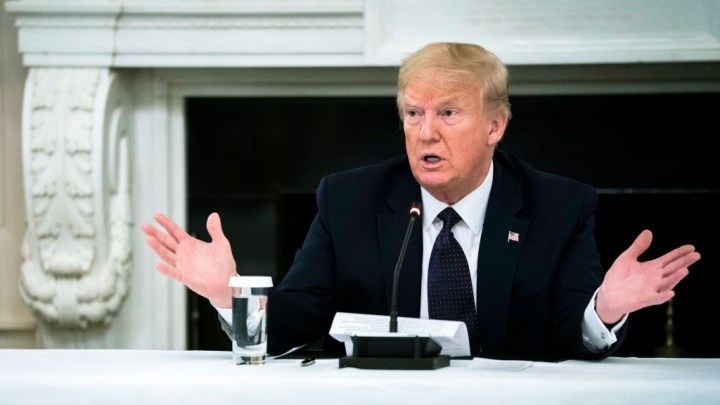 David Brancaccio, Victoria Craig, and Alex Schroeder May 19, 2020
Heard on:

COPY
In a late-night tweet, the president warned the WHO it has 30 days to make "substantive improvements" in becoming more independent. Doug Mills - Pool/Getty Images
COVID-19

David Brancaccio, Victoria Craig, and Alex Schroeder May 19, 2020
Heard on:

In a late-night tweet, the president warned the WHO it has 30 days to make "substantive improvements" in becoming more independent. Doug Mills - Pool/Getty Images
Listen Now

President Donald Trump late Monday night criticized the World Health Organization and called it a “puppet of China.” He set a short deadline for changes, threatening a permanent freeze on U.S. funding for the WHO.

Following that, China accused the United States of trying to shift the blame for what it called an incompetent virus response by the U.S.

Trump has accused the WHO of lacking independence from China based on a review his administration has carried out. In his late-night tweet, the president warned the WHO it has 30 days to make “substantive improvements” in becoming more independent, or risk permanently losing American funding, which the president froze back in April.

Last year, U.S. contributions accounted for just under 15% of the WHO’s overall funding. If the president follows through on his threat, that would leave a fairly large operational hole for the organization.

The WHO works to tackle not just the COVID-19 pandemic, but HIV/AIDS, tuberculosis, polio, measles — and it carries out a number of informational health campaigns around the world.

There’s been no response from the WHO itself, but back in April when the president announced the funding freeze, the UN’s chief said it was “not the time” to cut funds from the WHO.

China’s foreign ministry on Tuesday accused the U.S. of trying to mislead the public to smear China and distract from its own handling of the crisis.

This all comes amid a meeting of the World Health Assembly this week where member states have agreed to conduct an independent investigation into how the pandemic was handled “at the earliest appropriate moment,” though no timeline for that has been set.