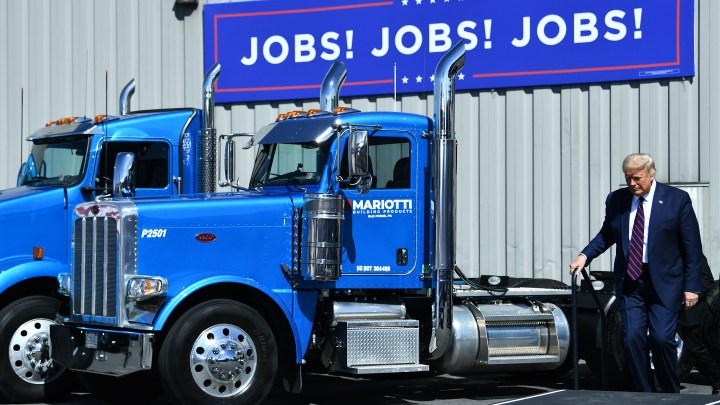 COPY
Experts say the flailing economy is going to be one of the biggest challenges to reelection. Brendan Smialowski/AFP via Getty Images

Experts say the flailing economy is going to be one of the biggest challenges to reelection. Brendan Smialowski/AFP via Getty Images
Listen Now

Sunday night, on the eve of the Republican National Convention, President Donald Trump released his second-term agenda. The list of items is titled “Fighting For You” and among other things it focuses on tackling COVID-19, education and relations with China.

In a rare move, this year there is no Republican party platform — just full support for the Trump administration’s goals.

Many of the list’s items will come as no surprise, like ending reliance on China, a major goal of the Trump administration’s first term. In his second term, president Trump promises to bring back a million manufacturing jobs from China.

On the COVID-19 front, the administration promises to find a vaccine by the end of this year and “return to normal in 2021,” which critics have said is too vague. Also on the list: have all critical medicines and health care worker supplies manufactured in America.

Experts say the flailing economy is going to be one of the biggest challenges to reelection.

Trump is promising to create 10 million new jobs in 10 months. The U.S. is down 13 million jobs during the pandemic.

Some items on the list raised eyebrows, like sending a manned mission to Mars and “teaching American exceptionalism” in schools.