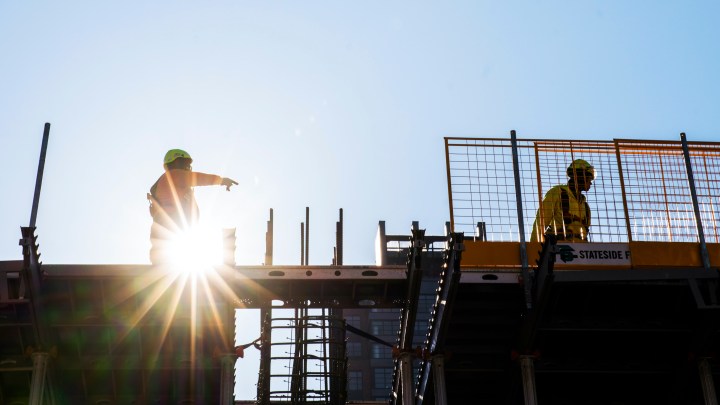 COPY
Construction workers at a project in New York City. Over the past four years, the industry has been frustrated by infrastructure-spending promises that never materialized. Eduardo Munoz Alvarez/Getty Images

Construction workers at a project in New York City. Over the past four years, the industry has been frustrated by infrastructure-spending promises that never materialized. Eduardo Munoz Alvarez/Getty Images
Listen Now

While emergency COVID-19 relief is hung up in Congress, the Biden administration is expected to unveil details of a longer-term economic recovery plan this month, focused on infrastructure. The plan would invest some $2 trillion over four years to build and repair roads, bridges and ports, create affordable housing and improve broadband networks.

A long-awaited influx of infrastructure spending would be welcome news to the construction industry. The latest numbers from the Census Bureau on Monday show construction spending, overall, was up almost 6% last month compared to December 2019. But take out residential construction — all that homebuilding and remodeling we’ve been talking about — and it’s a different story. In industries that are hurting in the pandemic, like hotels, office and retail space, and transportation, construction is down.

“On the private, nonresidential side, every category was down, many of them very sharply from a year ago,” said Ken Simonson, chief economist with the Associated General Contractors of America. “I think the outlook for nonresidential spending is pretty grim for the next few months.”

“Frankly, like Charlie Brown going after that football, we saw Lucy pull it away all through the last 4½ years,” Simonson said.

The need has only grown since then, said Kevin DeGood, director of infrastructure policy with the Center for American Progress.

“The money coming from Washington really has to do two things,” he said. “It has to backfill what’s been lost and what would otherwise have been spent under normal economic conditions by state and local governments, as well as then provide a boost on top of that.”

Then there’s the question of who’s going to do all the building and paving and wiring. The industry is facing a long-term shortage of skilled workers that dates back to the last recession.

Any infrastructure plan will have to come with more recruiting and training, said Grant Shmelzer, executive director of Independent Electrical Contractors Chesapeake, who has mixed feelings about a sudden surge in demand.

“Definitely excitement, definitely hesitation in the same breath, due to labor shortages,” he said. “If the bill actually goes through Congress, the next hurdle is going to be how do we do all the work that the bill would bring to fruition?”