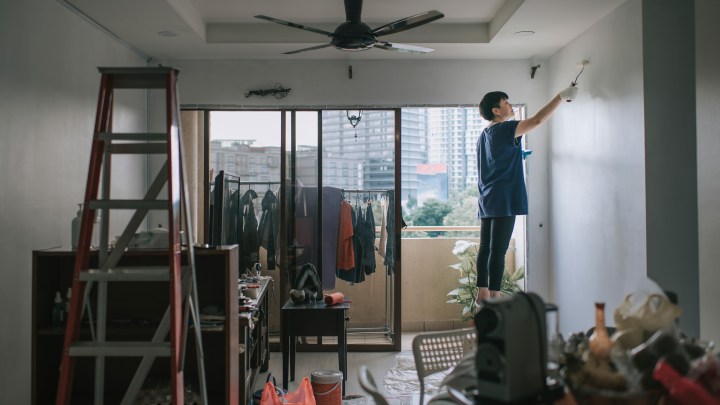 Jackie Deschenes has owned her house near Toronto for seven years, and there’s this one thing that’s always bugged her. There was a bulkhead above the kitchen cabinets that she suspected was just empty space behind drywall.

“My husband and I are both very tall, and we’ve often thought that that was space we could use for storage, more cupboards, whatever,” she said.

Then one Sunday morning back in April, a few weeks into the first pandemic lockdown, “we were just sitting having a coffee, looking at it, thinking, ‘Well, you know, if we just stick a little hole in the end here that we won’t really notice, we could find out if we’re right,’” she said.

It took six holes, but they were right. A couple weeks later, after she’d gone back to the office, Deschenes came home one day to find that her husband, Mike Wood, had ripped the whole thing out, down to the studs. It’s been that way ever since.

“You can see it’s up here behind me,” she said during a recent interview on Zoom, pointing out the 6-foot stretch of missing wall and ceiling above the cabinets. The pink insulation was visible behind plastic sheeting.

“We had such great plans,” Wood said. “Then things kind of didn’t materialize for various reasons, and now we’re just not sure what to do with it.”

Deschenes and Wood have shelled out zero dollars on this project — so far. But all this time at home has brought out the inner home improver in a lot of us, along with near-record spending. Harvard University’s Joint Center for Housing Studies estimates American homeowners spent nearly $340 billion on home improvement and repairs in 2020, up 3.5% from the year before, and that growth is expected to continue.

“We think that the increase in spending last year, a good chunk of it was a surge in what we would call DIY projects or small remodeling and repair projects,” said Abbe Will, a researcher with the Harvard center.

And not always with the best results. For every magazine-worthy kitchen renovation and beautifully landscaped fire pit, there are also the mishaps and disappointments — like the “chroma green” accent wall in the bathroom, or the realization that the back-ordered heat lamp that finally arrived is no match for, you know, winter.

Nic Pereira lives in Guerneville, California. With the money he and his husband, Sam Zifferblatt, aren’t spending on travel, they removed a giant redwood that was threatening their foundation and bought some new appliances. Zifferblatt also dropped $300 on two 10-by-10-foot tents for outdoor entertaining.

“Except he forgot to measure the space,” Pereira said. “We have a lot of outdoor area, but none of it was actually 10 by 10, so neither of the tents actually fit.”

Shipping them back would have cost about $50 bucks, so they sort of wedged one of them in. The other they’ll donate to a local restaurant.

Space has also proved challenging for Jennifer Harazin in Chicago. Her entire studio apartment could probably fit in one of those tents. So she kept her improvements small and put some plants on the windowsill.

“I thought that plants would make it a little more bearable as I work from home,” she said. “And when you live by yourself, it’s just nice to have a living thing with you.”

It was nice — until the weather got cold and she realized that her baseboard heater was right below her budding nursery, which by then had grown to 11 plants.

“They were getting too cold from the window and too hot from underneath and just like shriveling up,” Harazin said.

This where she entered the danger zone: Pinterest. Seduced by glamour shots of hanging gardens, she took an old clothing rack, got 10 macrame plant holders, and now she shares her tiny studio with a rolling jungle.

“So it’s either blocking my fridge, blocking my dishwasher, blocking my laundry, blocking my bed,” she said. “If it’s right against the couch, you hit your head on the plants. Every single part of it is just not what I wanted it to be.”

Now she’s just waiting for spring when the heat shuts off.

Virginia Meagher in Mountain House, California, knows something about waiting. She saved for nearly two years to remodel her kitchen. Finally, in August, she hired a contractor through a big home-improvement chain. The $30,000 job “was supposed to be completed absolutely no later than Oct. 26,” she said.

The work didn’t even start until November. Contractors are in high demand, and the pandemic has created all kinds of delays. Meagher’s family of seven spent Thanksgiving without a sink or a stove.

“Now we’re at the end of January, and they are hoping to finish within the next month or so,” she said.

As for Jackie Deschenes and Mike Wood, who ripped out part of their kitchen and then just stopped, they’re really in no hurry to finish. They’re both back at work now and busy. And you know that thing that happens when you’ve lived with something long enough?

“At this point,” Deschenes said, “I almost forget it’s there.”

People are adjusting to working from home for the long haul

Adventures in HousingCOVID-19
Tags in this Story
Share this Story