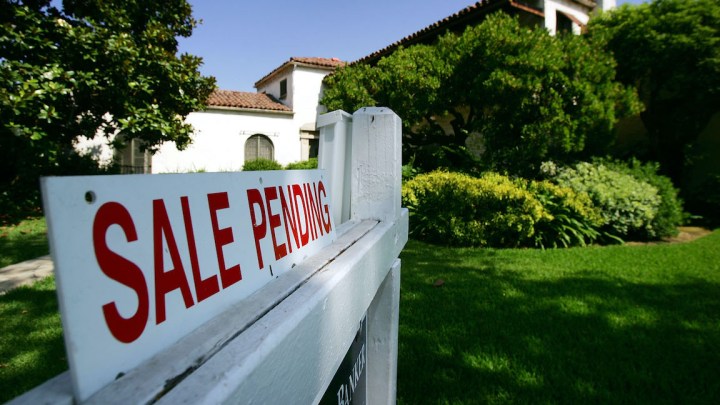 COPY
Is the price surge a blip? Many economists say the market conditions behind it are temporary. David McNew/Getty Images

Is the price surge a blip? Many economists say the market conditions behind it are temporary. David McNew/Getty Images
Listen Now

Pending homes sales continued falling in December, the National Association of Realtors said Friday. Sales of existing homes that are under contract but haven’t closed dipped 0.3% from the previous month, the fourth monthly decline in a row.

When compared to the same month in the prior year, pending sales were still up more than 20% in December. But the month-to-month decline was a sign that high home prices — and tight supply — are starting to slow down sales.

According to the S&P CoreLogic Case-Shiller national home price index released this week, home prices were up 9.5% in November, and even higher in cities like Phoenix, Seattle and San Diego.

Such increases are reminiscent of the housing bubble in the mid-2000s, when a combination of low interest rates and loose lending standards fueled double-digit price appreciation.

“I wouldn’t use the word ‘bubble,’ “ said Daryl Fairweather, chief economist at Redfin. “Bubble implies that it’s speculation that’s driving home prices high, and it really is the fundamentals of the market.”

Demand is high, thanks partly to record-low interest rates, while the supply of homes for sale is at an all-time low.

Federal Reserve Chair Jerome Powell was asked about a housing bubble at a news conference Wednesday. He called the recent price jumps “a passing phenomenon.”

“There’s a one-time thing happening with people who are spending all of their time in their house, and they’re thinking, either ‘I need a bigger house, or I need another house and a different house, or a second house’ in some cases,” Powell said.

All this demand will “call forth supply,” he went on, meaning high prices will entice more people to sell existing homes and build new ones.

“We had the highest level of construction in many years in 2020, so that new supply on the marketplace will help alleviate some of these severe shortages we’re seeing across the country,” he said.

More building should also loosen up the supply of existing homes, he said. One reason more people aren’t selling is that they can’t find a place to move into.