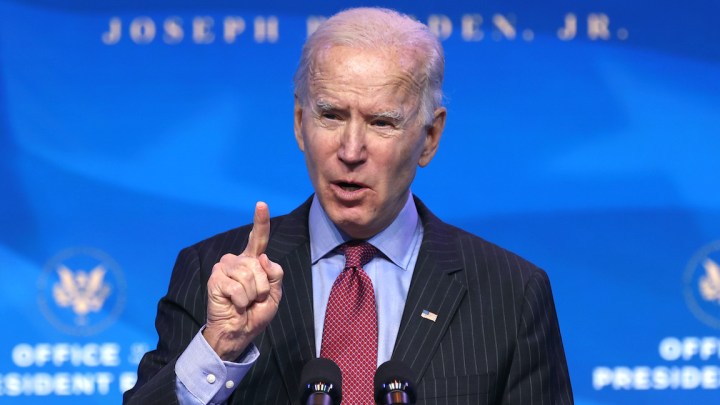 COPY
Whoever the president taps to run the OCC will play an important role in addressing economic inequality, including the racial wealth gap. Chip Somodevilla/Getty Images

Whoever the president taps to run the OCC will play an important role in addressing economic inequality, including the racial wealth gap. Chip Somodevilla/Getty Images
Listen Now

While the Biden administration scrambles to fill thousands of positions throughout federal agencies, the debate over who should occupy one key economic role burst into public view over the last week.

The job? Running the nation’s top bank regulator, the Office of the Comptroller of the Currency.

The candidates, according to multiple reports, are two law professors: Mehrsa Baradaran of the University of California, Irvine, an expert on banking and the racial wealth gap, and Michael Barr of the University of Michigan, who served in the Treasury Department of the Barack Obama and Bill Clinton administrations.

Advocates for both have intensified their efforts to sway the administration’s choice because there’s a lot at stake. The OCC has the power to regulate banks and some nonbank lenders.

“The OCC regulates 66% of the banking assets in the United States, and that includes the largest banks,” said Ellen Seidman, a nonresident fellow at the Urban Institute who worked with Barr in the Clinton administration. “So it has an outsized influence on how those banks, and in fact, really all banks, operate.”

Barr and Baradaran, as well as the White House and the Department of the Treasury, declined to comment for this story.

“This is sort of playing out as a sort of microcosm of this broader tension right in the Democratic Party and in the Biden appointments between more progressive candidates and then those who maybe have more of a conventional background, [with] lots of ties to the Obama administration,” said Erin Lockwood, who teaches political science at UC Irvine. (Lockwood said she does not know Baradaran.)

Lockwood said whoever the Biden administration ends up choosing will play a key role in efforts to address economic inequality.

“The OCC is tasked with enforcing two pieces of legislation that are pretty central to the racial wealth gap and racial inequality,” she said, referring to the Fair Housing Act, which is supposed to prevent housing discrimination, and the Community Reinvestment Act. Lockwood said the CRA is meant to “ensure that banks are active in lending to low-income communities where they’re located.”

Advocates have long complained that the OCC has not done enough to enforce rules and regulations under either act, and investigations by ProPublica in 2020 revealed the office under the Donald Trump administration “pulled back on civil rights enforcement as a part of its overall relaxation of bank oversight.”

“The OCC may be the most powerful agency that people have generally never heard of,” said Rebecca Borné, senior policy counsel at the Center for Responsible Lending. “And for many years, it put the short-term interests of bank profits ahead of serving the public interest.”

Borné’s group directly linked inaction by the OCC and other regulators to the severity of the economic fallout of the 2008 financial crisis.

This history has those in favor of more regulation clamoring for change, especially around enforcement of the Community Reinvestment Act, “which has been around since 1977 and hasn’t had new regulations since 1995,” said Buzz Roberts, who runs the National Association of Affordable Housing Lenders. “And so the new Comptroller of the Currency is going to have to take another look at those rules and decide whether and how to reengage with the other banking agencies as well as other stakeholders.”

Those stakeholders include consumers, banks, fintech companies, industry groups and advocates, many of whom are campaigning both publicly and privately for their candidate of choice.