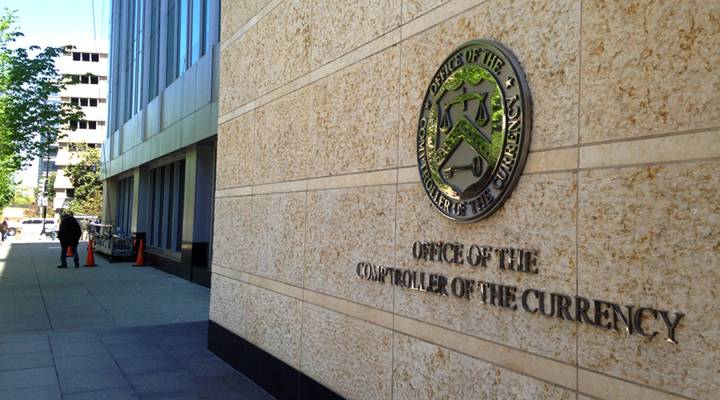 COPY
An exterior view of the Office of the Comptroller of the Currency in Washington D.C. Nancy Marshall-Genzer/Marketplace

An exterior view of the Office of the Comptroller of the Currency in Washington D.C. Nancy Marshall-Genzer/Marketplace
Listen Now

The House could vote before the end of May on legislation rolling back some of the Dodd-Frank financial reform law. The bill is putting the Office of the Comptroller of the Currency in the news, along with a debate over how to say its name. Keith Noreika was acting comptroller for about seven months last year. He always said “comptroller,” pronouncing the “m” and the “p,” he said.

Noreika says he never even considered saying “controller.” Because the word is spelled c-o-m-p-t-r-o-l-l-e-r.

“When there were people who maybe didn’t say the ‘m’ and the ‘p’ that sort of made me think, you know, is this somebody familiar with what that agency does or not,” he said.

Noreika could be asked the same thing, given that the entire time he was acting head of the OCC, he mispronounced his own title. According to Katherine Conner Martin, head of U.S. Dictionaries at Oxford University Press, the preferred pronunciation is “controller.” But not using the preferred pronunciation seems to be the rule at the OCC. The current head of the agency, Joseph Otting, says “comptroller.” So does Jesse Stiller, the OCC historian for 27 years. Stiller says whenever he talked to the guy in charge, “I would always call him Mister Comptroller,” he explained. “Were others as fastidious? I don’t know, but there were some who made a point of this.”

Like Teddy Roosevelt, who tried to change the spelling and pronunciation to “controller” in 1906. But Stiller says Roosevelt ran into stiff opposition.

“The title meant a lot to people,” Stiller said.

These days the OCC is lucky if people even know what it is and what it does. It regulates banks. Banks also have controllers.  The c-o-n-t-r-o-l-l-e-r kind. Outside the OOC building, I asked about 20 people how to pronounce the word in question. All but three of them said “comptroller,” including Management Analyst Solomon Sogunro.

“Who determines how it’s spelled?” he asked. “Is that the president?”

It’s not the president. Katherine Connor Martin at the Oxford English Dictionary says the strange spelling which led to the weird pronunciation goes way back.

Connor Martin says the dictionary does list “comptroller” as a secondary pronunciation. But it could move into first place.

“If enough people pronounce a word a certain way, then over time, that becomes the established and correct pronunciation,” she said.