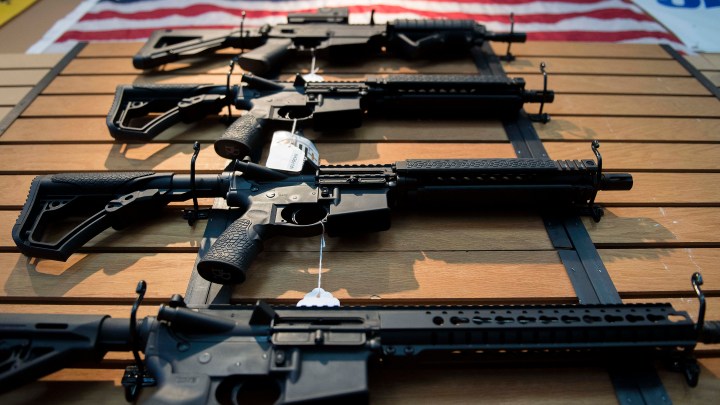 COPY
The rule prohibits large banks from refusing to lend to certain business sectors, after Republicans voiced frustration at what they saw as a reluctance by banks to finance gun-makers and energy firms. Jim Watson/AFP via Getty Images

The rule prohibits large banks from refusing to lend to certain business sectors, after Republicans voiced frustration at what they saw as a reluctance by banks to finance gun-makers and energy firms. Jim Watson/AFP via Getty Images
Listen Now

The Office of the Comptroller of the Currency finalized a new banking rule on Thursday. It says that banks will now be barred from refusing to finance businesses solely because of perceived reputational risk.

Some have called it the “gun-makers and oil drillers rule,” in response to socially responsible investing that has become more widespread among consumers and among activist investors. This rule change calls into question the ultimate role of a bank.

The new rule says large banks need to prove there are financial risks that lead them to deny services. They can’t just deny service based on what a business does.

Chris Odinet, a law professor at the University of Iowa, said he thinks this regulation is a response to the 2018 school shooting in Parkland, Florida, that killed 17 people.

“So in the wake of the shooting, a number of banks — large banks, Bank of America, Citigroup — said they would no longer finance companies that produced combat-style, semiautomatic rifles and attachments like bump stocks,” Odinet said.

He said many conservative politicians didn’t think banks should do that and this rule is the result.

Brian Knight, a senior fellow at the Mercatus Center at George Mason University, said banks argue that they’re private businesses and should be able to serve any company they want.

The counterargument is, “yes, but you exist in a regulatory environment, that’s beneficial for a specific purpose,” Knight said.

He said the rule could end up in court or the incoming Biden administration could get rid of it, but the broader issue of activist banking will continue to be debated.