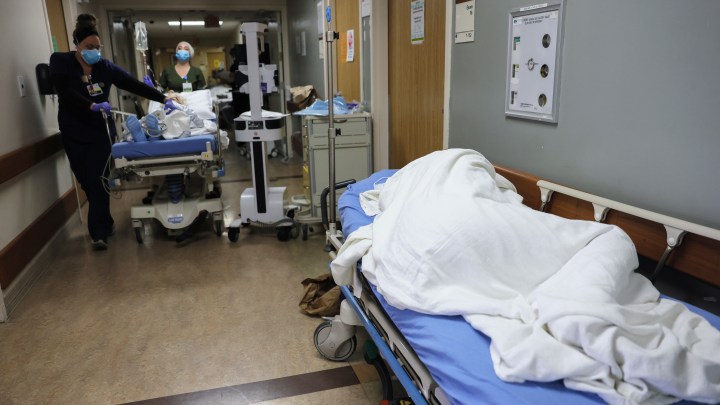 COPY
A patient lies on a stretcher in the hallway of the overloaded emergency room at a hospital in Southern California on Dec. 23. Mario Tama/Getty Images
COVID-19

A patient lies on a stretcher in the hallway of the overloaded emergency room at a hospital in Southern California on Dec. 23. Mario Tama/Getty Images
Listen Now

With the resurgence in COVID-19 cases, hospitals around the country are in trouble. It’s even worse in California where many hospitals are at zero percent capacity in their Intensive Care Units.

In Southern California, the epicenter of the outbreak, hospitals have turned away ambulances because they are so short on beds, some even putting patients in conference rooms and gift shops according to the Los Angeles Times. Despite being the wealthiest state, California has a lower than average number of hospital beds.

California has 1.8 hospital beds per 1,000 residents, according to data from the Kaiser Family Foundation. That’s below the national average, the third lowest in the country.

But, it turns out, that’s by design, and Stephen Shortell, a professor of health policy and management at University of California, Berkeley, said “for the most part, it’s a good thing.”

Shortell said that the state’s limited hospital capacity is an outgrowth of California’s dominant form of “managed” health care — typified by Kaiser Permanente — which focuses more on prevention and outpatient care. In this system, he said, “you have every incentive to keep them out of that hospital bed.”

He added that in a “normal” emergency, patients can be moved to mobile field hospitals. But those need to be staffed by medical professionals, and that’s the challenge during this pandemic, said Dr. George Rutherford, an epidemiologist at University of California, San Francisco.

“A lot of our system is set up to say, ‘Oh, there’s a big earthquake in Northern California, we can bring health help in from Southern California,’ but everybody’s being squeezed at the same time,” Rutherford said.