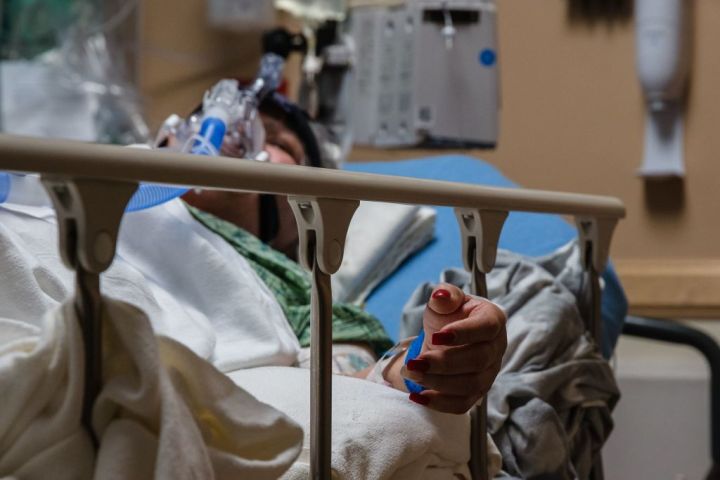 Inside the hospital in rural Bolivar, Tennessee, a crisis is unfolding. The modest medical center usually only keeps two or three patients overnight. Now it’s averaging a dozen, half with COVID. And they’re staying for a week or more.

“In normal times, we would be able to get those patients out to a higher level of care,” said Ruby Kirby, CEO of West Tennessee Healthcare’s Bolivar General Hospital.

Those on ventilators need to be transferred to hospitals that have critical care units in bigger cities. But there are no openings in nearby cities.

“We’re managing them, but it is putting a strain on the system,” she said.

Many states with the lowest vaccination rates have something in common — their hospitals are either overwhelmed or on the verge. But even in the states hardest hit by this COVID surge, the crisis is playing out behind hospital walls not visible to the general public.

Patients are backing up within the hospital system. And the surge caused by the delta variant is causing more problems than previous surges.

Even larger hospitals don’t have all the capabilities that could help.

“It’s hitting patients completely differently. They are getting so much sicker so much faster,” said Mae Rice, a traveling ICU nurse working in a Georgia hospital.

Her hospital doesn’t offer a high-level life support called extra-corporeal membrane oxygenation. ECMO, as it’s called, is the last step beyond a ventilator when a machine oxygenates the blood outside the body. Her hospital has to wait on those ECMO beds to open up elsewhere … at the few medical centers that have the specialized staff.

The staffing concerns have put some of the biggest medical centers in a bind — not because they’re out of beds but because there are no more nurses available.

“There’s only so much that we can do,” said Dr. James Shamiyeh, chief operating officer of the University of Tennessee Medical Center with more than 500 beds. “As you start to see the writing on the wall as far as sicker patients in the ICU, that’s why we need the community’s help so much.”

The plea is for people to get their COVID shots. In Tennessee, unvaccinated patients make up nearly 90% of COVID hospitalizations.