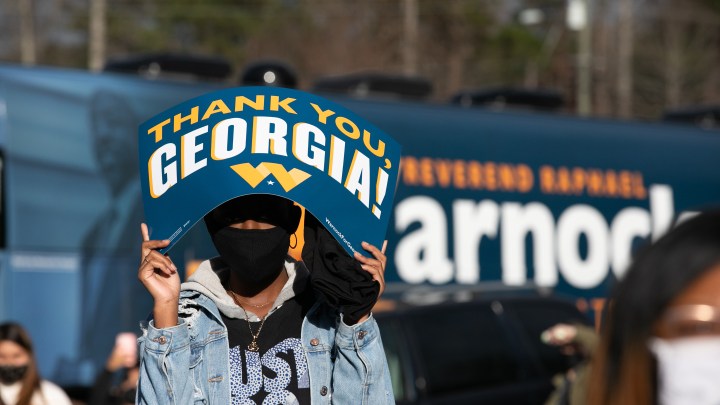 “Top 40, country, adult contemporary, gospel, active rock, classic rock, we just got a little bit of it all,” Brannan said.

And what all the stations now have is political ads, lots of them.

More than $450 million has been spent so far in political advertising in Georgia’s two U.S. Senate run-off races, a record for the state.

Republicans Kelly Loeffler and David Perdue are trying to fend off challenges from Democrats Jon Ossoff and the Reverend Rafael Warnock.

One big winner already in the races is small market radio.

“I’ve been in the industry for 20 years now in this market, and the amount of money that we’re seeing across our stations is more than the past 20 years combined, honestly,” Brennan said.

“It’s a godsend that we’re receiving this now,” said Charles Hubbard, who owns a country and a sports radio station in rural Jesup, Georgia. He said the campaign dollars for the runoff help make up losses from the coronavirus pandemic.

“Let’s just put it this way, it’s coming in at a good time for radio stations, I can tell you,” he said.

As a newly-minted battle ground state, Georgia already got its fair share of ads for the November election. Then both U.S. Senate races ended up in a Jan. 5 runoff.

“Before Georgia got the spotlight shined on it, we got more than usual, but not a firehose of advertising like we’re getting now,” said Eddie Esserman, who owns three different radio stations along the Georgia Coast.

Financial disclosures show all four candidates in the race are spending a big chunk of their radio dollars outside of the big Atlanta market.

”There is so much money being spent in Georgia right now that they are asking us ‘What is the maximum number of commercials that we can buy?’” said Roger Rafson, a media sales representative with Gen Media Partners.

He is in charge of placing political ads on more than 150 small market radio stations across Georgia. He said an FCC rule that says candidates be charged the lowest rate means their money can go far.

“For candidates, some of these ads are downright inexpensive. You can have a full minute of your message for under $20 in some cases, it’s really cheap,” he said.

But it’s a different story for political PACs, which make up the bulk of ad spending in Georgia right now.  They have to pay top dollar, Rafson said.

“As we get closer to Jan. 5, many radio stations are raising their rates, just because they are selling out. And this is their opportunity to do well. And if the PAC wants to really reach their audience, they will pay the rate,” he said.

One reason so much money is flowing into the state is because of the possible power shift in the Senate should the two Democrats win.

Emory University political scientist Andra Gillespie said while Republicans have won these Senate runoffs in Georgia in the past, this year Democrats are energized and have money to spend.

“Because Joe Biden just won the presidential race and Democrats are now able to flex muscles in terms of being able to say they’ve won a statewide race there is greater incentive to get involved in the race,” Gillespie said.

A race, she said, that is all about turnout, and Georgians in every corner of the state will have heard that there’s another election Jan. 5.

Whether all the ads make people come out to vote is another story.