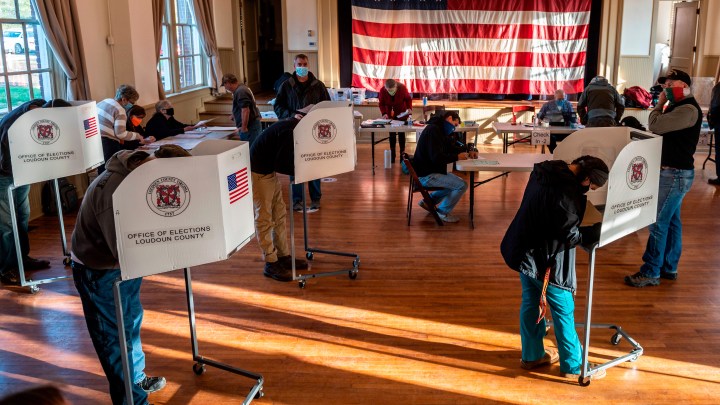 COPY
"We really need to get better at voting by mail and the early vote,” a Republican political consultant said of the election. Above, voters cast their ballots in Hillsboro, Virginia, on Nov. 3. Andrew Caballero-Reynolds/AFP via Getty Images
Elections 2020

"We really need to get better at voting by mail and the early vote,” a Republican political consultant said of the election. Above, voters cast their ballots in Hillsboro, Virginia, on Nov. 3. Andrew Caballero-Reynolds/AFP via Getty Images
Listen Now

An estimated $14 billion went into 2020’s federal races, and money is still being raised and spent for postelection legal fights and settling campaign debts.

But with a pivotal Senate runoff coming up in Georgia, campaigns and political activists are doing a quick study of the recent campaign to determine how best to deploy resources in Georgia, and there are already some takeaways.

“2020 was the year where we can all agree that there is not a silver bullet and that the jig is up on some of the tools that people got so dependent upon in cycles past,” said Lucy Caldwell, a political strategist and technologist.

For example, Caldwell said, deluging voters with emails and fundraising texts and overspending on TV ads.

“TV, in a lot of ways, is like the steroids version of yard signs,” Caldwell said. “It makes donors and the candidates … feel happy about what they’re doing. But it’s not a particularly effective way to spend money.”

Ads do raise awareness of a candidate, said Michael Franz, co-director of the Wesleyan Media project and a professor at Bowdoin College, and can make a difference in very close races. But beyond a certain point of saturation, viewers just tune them out. And that may be especially true when ads for a congressional or senate race come from, or are funded by, people outside the state.

“We can use this [race] as a reasonable inference from what we saw that voters may not like the ‘nationalization’ of these congressional races,” said Franz, who said that lesson is going to be key in ad strategies for the Georgia runoffs.

“And so if Democrats are going to try to fundraise and put ads on TV using that pitch, saying help us win back the Senate, it may not work if Georgian voters think that local concerns don’t matter as much as these national concerns,” he said.

Many political activists complain the emphasis on political ads often come at the expense of strategies that are more effective.

“Campaigns that spend millions and millions on TV and digital ads, and don’t have organizers in urban, rural and suburban areas — that needs to be retired,” said Aimee Allison, president of She the People, a group that works to get progressive women of color into office.

“Campaign teams that don’t reflect the diversity of the Democratic Party — that should be retired,” Allison continued. “At every level, campaign teams and volunteers should be as diverse as the communities they represent.”

She said the Democrats need to look to diverse coalitions like the one Stacey Abrams built in Georgia and let them take the lead.

Republicans have some takeaways from the recent election as well.

“Well, I hope we learned that we really need to get better at voting by mail and the early vote,” said Chris Jankowski, a Republican political consultant. “It’s like spotting your opponent a two-touchdown lead in a football game with confidence that somehow you’re going to make it all up on Election Day.”

Jankowski said in Georgia, with control of the Senate on the line in January, that’s not a mistake Republicans will make again.