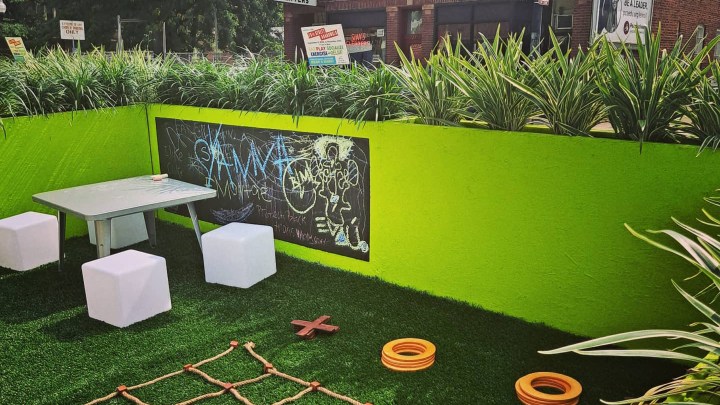 Large neon green sidewalk pods stretch a couple of blocks in the Park Manor neighborhood on Chicago’s South Side.

This fall, as the city adjusted to the realities of COVID-19, people could sit outside, eat ribs, vegan dishes or caramel cake from nearby businesses. They could play oversized checkers and tic-tac-toe.

The pandemic has forced city residents to be less dependent on downtown for activities, explained Maurice Cox, Chicago’s commissioner for the Department of Planning and Development.

“I feel really strongly the scale of urbanism, the scale neighborhood is going to be one of the major takeaways post-COVID,” he said.

In many communities, life sheltering in place isn’t changing any time soon as restrictions on gatherings grow more strict. With COVID-19 changing the way people live and get around, city planners in Chicago see the pandemic as an opportunity to rethink urban living.

Cox says imagine if every neighborhood had its own downtown.

What’s happening in the Park Manor neighborhood is exciting to Dawveed Scully. He’s an urban designer with Skidmore, Owings & Merrill, an architectural firm.

“Urbanism in cities is about collective energy and collective activity,” he said.

But that activity will need to be supported with meaningful investment. And historically that hasn’t happened in Chicago’s Black and Brown neighborhoods. Lynda Lopez, a manager for a local transportation advocacy group, said that concerns her.

Standing in an empty lot in a Chicago neighborhood, Lopez points out that there are homeless people camped out nearby. She said this area should be turned into affordable housing.

“Every time I go into Little Village, I cross viaducts and they’re pretty much tent cities,” she said.

This should be the focus of urbanism, she said, making sure everyone is taken care of.