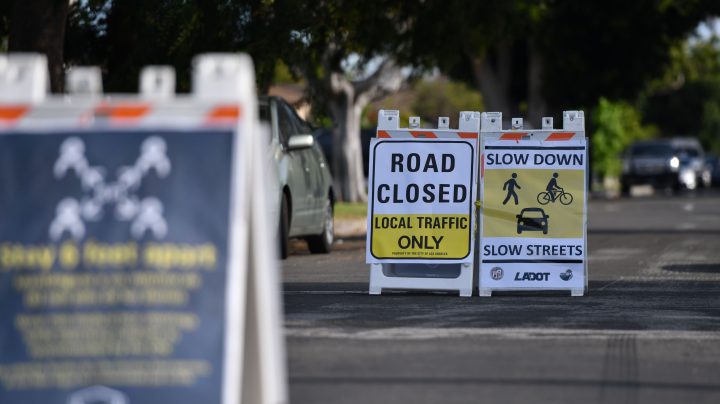 Los Angeles is among the cities introducing "Slow Streets" for pedestrians and cyclists. Chris Delmas/AFP via Getty Images

Los Angeles is among the cities introducing "Slow Streets" for pedestrians and cyclists. Chris Delmas/AFP via Getty Images

By now you’ve maybe seen the photo of a German cafe, showing patrons happily sitting outside, wearing hats with pool noodles attached. The giant foam straws, a little over 5 feet in length, are supposed to help people maintain a safe distance from each other, as Germany reopens some bars and restaurants.

Going out to dine is an enticing view of a post-coronavirus world. However, wearing a multicolored pool toy probably doesn’t fit into most people’s definition of a normal life. It’s a little extreme, but a useful illustration of the difficulty of respecting social distancing rules. The drink-sipping Germans are managing it, outdoors, on the sidewalk. In a small restaurant, it would be impossible. That need for more space is leading city leaders across the globe to rethink how space is used in urban environments, often clawing a little of it back from cars, and giving it to people, to sit, to exercise, and to commute.

In the average western city, around 40% or more of land is dedicated to cars, including parking and roads. During the coronavirus outbreak, some cities experimented with adjusting that balance.

“A lot of these ideas aren’t novel, just new for the location,” said Jonathan Berk, director at Patronicity, a civic crowdfunding site dedicated to community improvement projects. He’s currently working with business groups, residents, and neighborhood associations in parts of Boston to come up with ways for people to use streets differently, during the economic recovery from COVID-19.

The coronavirus has provided the opportunity for a natural experiment into what cities could look like with fewer cars. As many parts of the world went into lockdown to prevent the spread of COVID-19 traffic dropped dramatically. Los Angeles saw its longest period of clean air since 1980. Residents marveled at the clear, smog-free views. Traffic is slowly increasing, despite the city extending its safe at home order with no specific end date. Now there are calls for LA to take a cue from Europe, and allow restaurants and cafes to close off parking lots, or even some traffic lanes on streets, to create more, safely spaced, outdoor dining areas.

“People had the chance to look at a blank canvas,” said Berk. Now they should be asking what they want their cities to look like in the future.

Oakland, in the Bay Area of California, helped its residents deal with the claustrophobia of sheltering at home, and the lack of gyms and other exercise facilities, by giving them the run of their local streets, with “Slow Streets” initiatives. The city restricted car access to nearly 74 miles of roads. Residents used them for well spaced walks, bike rides, rollerblades, and even dance parties.

New Zealand announced national funding for bike lanes and wide sidewalks. London’s mayor, Sadiq Khan, announced plans to transform parts of the UK capital into one of the largest car free zones in the world, to encourage cycling and walking while travel on the city’s usually crowded tube and double-decker bus network is discouraged. “London’s road to recovery cannot be clogged with cars,” tweeted Khan.

And Milan, in the extremely hard hit Lombardy region of Italy, has announced ambitious plans to keep some of the improvements to local air quality and pollution levels it’s seen during lockdown, with 22 miles of streets now to be given over to cycling and walking.

As well as more space for movement, cities are working on ways to create more space to sit still. Phased reopening plans for many jurisdictions call for reduced capacity at venues like restaurants, allowing them to seat 25% or 50% of their usual capacity.

Denver has just launched a program to give those businesses the option to expand into adjacent sidewalks, streets, and parking lots. Chicago is among the cities planning something similar, while Tampa, and Cincinnati have already done it.

There’s a growing consensus amongst experts that being outdoors is safer than being inside.

“Sitting in an enclosed space for an hour or more having dinner creates a lot of potential opportunities for infection,” said Eleanor Murray, who researches epidemiology at Boston University, School of Public Health.

In her neighborhood some streets have increased space for pedestrians, meaning she can walk outside and leave more space between herself and others. She’s hoping to see restaurants spread into the streets too. “Outside where there’s no walls enclosing you, and a fresh breeze, that decreases the risk of transmission from the people around you.”

Providing well spaced patio seating may entice restaurant-goers back sooner, bringing essential revenue with them. Murray sees other businesses having to be creative too. Gyms and yoga studios may have to find space to have classes outside, for example. As we move from the crisis phase of the pandemic, to a new normal, she believes the businesses with the most flexibility are the most likely to survive, or even thrive.

All these efforts have the potential to help cities with economic recovery. “There are long term health impacts and long term economic impacts to keeping a city moving,” said Berk.

He cautions that community buy-in is essential. American cities, in general, are more reliant on the car than other parts of the world. Some of the large scale open streets initiatives are not going to be sustainable long-term if they impede people coming into a city’s business district. Berk wants to see creative approaches to keeping the best parts of what’s being learned now.

“There is no playbook for ‘how do you reopen a city after a pandemic’,” he said. “Everyone is writing it now.”