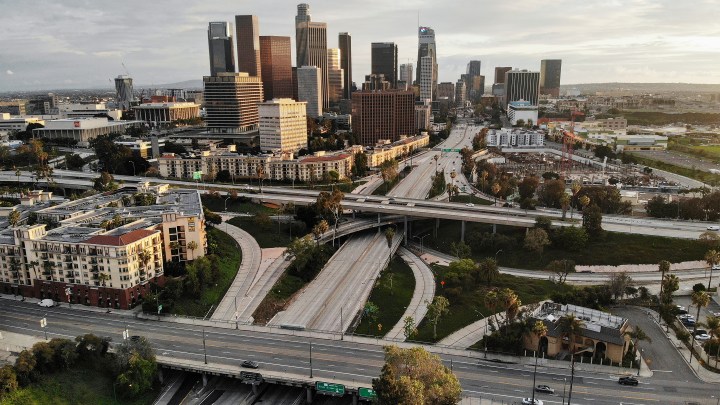 If you tried to go out for a walk or run over the weekend, you may have run into a problem maintaining 6 feet of social distancing.

When sidewalks aren’t that wide — and getting crowded — it’s tough to keep a decent amount of space between you and other people. Some cities are experimenting with closing streets to cars to allow more room for cyclists and pedestrians. That could change the way we think about our cities.

For example, the car is king here in Los Angeles. But over the last few weeks, while we’ve been staying at home, so has the king — in our garages and driveways.

I’m on Hollywood Boulevard, where there are six lanes for cars. On a Monday, this would normally be packed. Today, although there’s some traffic, it’s light. But pedestrians are still squeezing past one another on a sidewalk that’s maybe 8 feet wide if you don’t have to duck around the trees and benches and bus stops.

This past weekend, Oakland Mayor Libby Schaaf closed 74 miles of streets to through traffic in what she called “an effort to give Oaklanders space to spread out.”

Philadelphia, Minneapolis and Denver are among the other places trying something similar.

So is Boston, where Jonathan Berk, an advocate for walkable urban communities at Patronicity, took advantage of a closed street on Saturday.

“It was not packed, but well-spaced out with rollerbladers, bikers, walkers, pedestrians,” Berk said.

He said New Zealand is out ahead of other countries — the government is funding every city to make changes.

“They’re viewing this, rightfully so, as an opportunity to say, ‘We can rearrange our land-use patterns in downtown to allow for more space for people to move safely, go back into restaurants, bars, stores, and to start moving the economy again,’ ” Berk said.

Closing streets doesn’t have to cost a lot, according to Brent Toderian, a city planner and urbanist and former chief planner for Vancouver, Canada.

“This pandemic has really revealed how little space we actually have in many cities for people because of all the space we’ve given to cars,” Toderian said.

And with urban dwellers stuck in small apartments, it’s highlighting how important public space is.