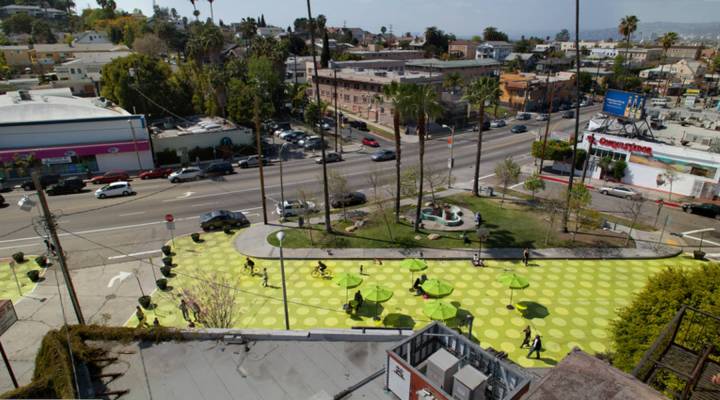 This week, police hunted down and shot a suspect in a van attack that killed 13 people in Barcelona. The story is, unfortunately, increasingly familiar — random, soft target terrorism is increasingly becoming more common.

The measures that could help prevent van attacks are more physical, more costly and frequently more disruptive than standard counterintelligence operations. Architecture and urban design has often played a role in responding to violence or crisis.

Airports are protected with a heightened security presence, barriers and random searches. Many modern buildings are designed with cement and other construction material made to be more blast resistant. Large events, even farmers markets, are buffered by vehicles at either end and temporary barriers to let people in — and keep others out.

Here are a few ways urban planning and architecture could be used to protect against vehicle terrorism:

1. Trees, poles and planters. Sidewalks lined with large trees are harder to drive up on, and help keep pedestrians safer from cars that veer off the road. Other high foot traffic areas can be protected with large planters, metal poles, and other permanent barriers to keep cars from going too far once they jump the curb.

2. Designing for surveillance. Interspersing low buildings with high vantage points gives law enforcement a more complete view of what’s happening on the street and the sidewalk, and possibly an angle to take out a rogue vehicle. This design style combined with spikes that flip out of the sidewalk to disable tires (like the ones in most parking garages) could help police to act faster.

3. Pedestrianize entire streets. Most incidents of vehicle terror take place in areas where cars and pedestrians both have access. Entirely pedestrianizing popular walking streets that are especially vulnerable would eliminate this intermingling and potentially mitigate risk.

4. Ring of steel. This security tactic is nothing new — London and Belfast both got rings of steel as a response to Irish Republican Army bombings. A ring of steel uses narrowing roads to force a slowdown of traffic entering a city, often in combination with heightened surveillance and entirely closed roads, which reroute traffic.

So why don’t we see more of these urban planning security measures in action? Brian Michael Jenkins, a counterterrorism expert at the RAND Corporation, said that these methods are not only costly and disruptive, they’re also likely to be relatively ineffective.

Vehicle terrorism has killed only 167 people since 2000 — an average of four people die in each incident. Even though there has been an increase in this kind of attack, that number is actually small compared to the total number of auto-related deaths. In the U.S. alone, auto accidents kill an average of 5,000 to 6,000 pedestrians per year, 900 of those due to drunk driving.

Jenkins said that because terrorist acts are more dramatic and publicized, the urge to respond with infrastructure changes is greater, but even if U.S. cities were to implement these changes, because of the random nature of vehicular attacks, there might not be much change in the number of incidents or deaths.

The design changes could cost more than money, too. Restricted urban spaces and heightened surveillance and security could cost Americans their privacy and certain freedoms.

Down the road, there are likely to be plenty of less disruptive security measures that would have a more pronounced effect on vehicle terrorism. Rental car companies could use more advanced screening tools to look for out-of-the-ordinary behavior — just like airlines. Semi-autonomous and autonomous vehicles could be built to be disabled upon impact with a pedestrian or to stop once they enter an electronic ring, which could serve as a barrier in pedestrian areas.

Correction (August 30, 2017): A previous version of this story incorrectly stated that the number of people killed in auto accidents is 5,000 to 6,000 — that is the number of pedestrians killed.