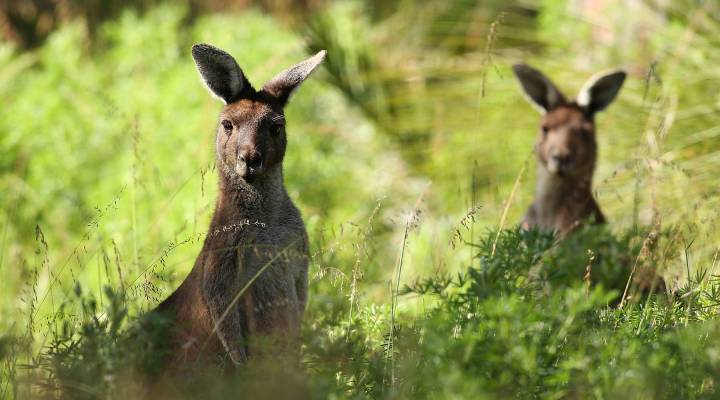 COPY
Watch out for the kangaroos. Paul Kane/Getty Images

Watch out for the kangaroos. Paul Kane/Getty Images
Listen Now

There’s been a lot of talk about how driverless cars will navigate city streets, where pedestrians affect traffic flow. But what about the “pedestrians” of suburban and rural areas? Animal-related car accidents are a real concern for driverless car makers. And so far, engineers have been able to adapt cars to deal with creatures like deer, moose and elk.

But they haven’t cracked the code when it comes to kangaroos, which account for 80 percent of animal-related accidents in Australia. That’s because kangaroos are much trickier — faster and more shape-shifting — than other animals that wander onto roads. If car makers don’t figure out a solution, they could be missing out on a huge market.

Marketplace Tech’s Ben Johnson spoke with Pedro Domingos, a computer scientist at the University of Washington, about this gap in machine learning and how far away the industry is from solving the problem. Below is an edited excerpt of their conversation:

Ben Johnson: Deer, moose, elk — these computer vision systems are not terrible at recognizing some of those familiar, at least to North America, animals, right?

Pedro Domingos: They’re not terrible partly because people saw this was a problem and they’ve worked hard on it to detect these animals. Deer and moose, they’re bigger and they move slower.

Johnson: And why are kangaroos particularly difficult?

Domingos: They can jump quickly across the road and in front of the car. They’re low. And they also change shape as they hop more than a deer does, which makes it harder for even a state of the art computer vision system to understand that yes, this is a kangaroo and not a wind-blown plastic bag.

Johnson: Can you see a possible future where companies start employing ecologists or something like that so that there’s a software package that gets plugged into the self-driving car technology that has all the animals that are unique to that region?

Domingos: I think cars that get deployed in different countries and environments will have to be trained for those environments. Having said that, the reason we have self-driving cars today is because of machine learning. It’s not because somebody programmed into the car what to do. In fact, nobody actually knows how to program a car to drive. The car watches the person drive and learns to do the same.

Johnson: We should ask this though: Are you humans really any better at avoiding chaotic-behaving, unpredictable animals than driverless cars are?

Domingos: Humans really suck at driving. Except, compared to machines, we’re brilliant. In some ways we’re not set up for driving — we have only one pair of eyes, etc. But we’re really good at the type of sensory motor control that it takes to drive a car. The exception to that is when we impair ourselves by getting drunk or talking on the phone. Having said that, I think cars could become so much better at driving than humans that maybe human driving will be outlawed.