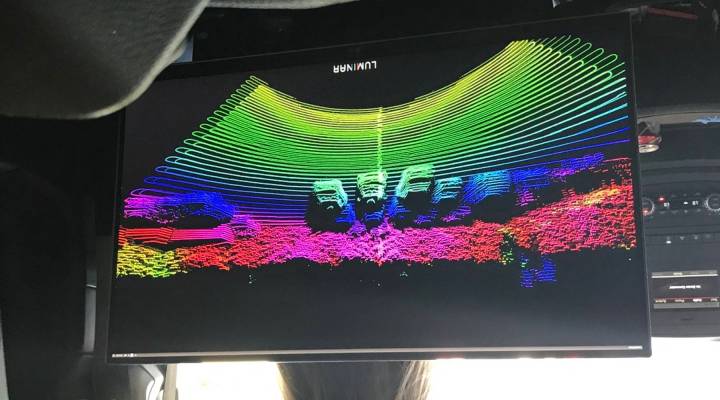 Hundreds of companies are racing to build self-driving cars. And there’s one piece of tech that’s essential to all of their efforts.

It’s called LiDAR, or Light Detection and Ranging. The technology uses lasers to sense distances to a target, and then turns it into a 3-D representation of the environment. It’s how a self-driving car sees the world around it.

Marketplace Tech’s Molly Wood spoke with Austin Russell, the founder and CEO of LiDAR provider Luminar Technologies about LiDAR’s current limitations and its future. The following is an edited transcript of their conversation.

Molly Wood: LiDAR has, as a technology, existed for a while. People are becoming familiar with it, there’s obviously a really big lawsuit about LiDAR technology right this minute. What makes yours different?

Austin Russell: We’ve really designed a new type of LiDAR platform from the ground up, specifically for autonomous vehicles, because  this is a truly mission-critical application. This is something that, you know, having 99 percent object detection accuracy is completely unacceptable because you can’t miss one out of every hundred people or one out of every hundred cars.

Molly Wood: One of the things I’ve heard is in the Uber-Waymo lawsuit they’re suing each other and spending all this money over LiDAR technology that’s frankly not the top of the game. So are you the company that could enable companies like Uber to just not have to build their own? Is that the long-term goal?

Russell: Yeah. I think with a lot of these companies, they knew they needed to have something. They need to guarantee a supply of this technology. In fact, companies like that, they don’t want to have to build their own type of LiDAR platform. It’s something they’ve just frankly had to do for a couple of reasons. One is that you straight up can’t buy these sensors out there in any reasonable quantity. Actually, the number of autonomous vehicles on the road are literally just limited to the number of LiDAR sensors that can be produced.

Austin Russell in his garage at Luminar HQ in Silicon Valley.

Wood: Can you give us a sense of who you’re working with?

Russell: So we’re working with, currently it’s four autonomous vehicle programs and car companies to be able to get these sensors initially deployed out into real world environments and enable a lot of these programs to finally have the ability to see at much farther ranges and in much higher resolution than they ever otherwise would have been able to.

Wood: So wait. You can’t tell us who you’re working with?

Russell: Uh no — no specifics on that. But at the same time it doesn’t really make sense for us to work with all of these different companies, which is why we’ve selected a handful of the ones that we think are going to be most successful to be able to work with and deploy sensors to initially.

Marketplace Tech BlogsVideo
Tags in this Story
Share this Story