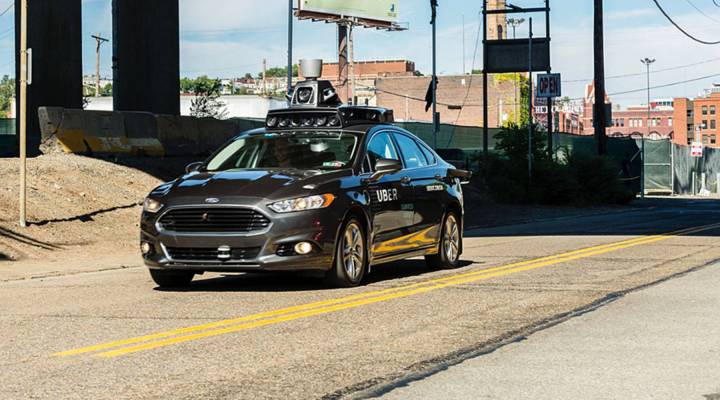 COPY
A passenger looks on as he rides in a pilot model of an Uber self-driving car on in 2016 in Pittsburgh, Pennsylvania. ANGELO MERENDINO/AFP/Getty Images
Marketplace Tech Blogs

A passenger looks on as he rides in a pilot model of an Uber self-driving car on in 2016 in Pittsburgh, Pennsylvania. ANGELO MERENDINO/AFP/Getty Images
Listen Now

A self-driving Uber car struck and killed a pedestrian last week in Arizona. The state, which welcomed autonomous vehicle testing with the promise of little regulation, has suspended Uber’s Arizona operations. Uber had already voluntarily stopped all self-driving activities after the accident. Marketplace Tech host Jon Gordon spoke with reporter Jimmy Jenkins of public radio station KJZZ in Tempe, Arizona, to take a second look at how self-driving cars will be regulated. The following is an edited transcript of their conversation.

Jon Gordon: How did the public respond when driverless cars started showing up?

Jimmy Jenkins: Well, I remember it as sort of a gradual thing. They’ve got that big thing on the top that everyone has come to know as the LIDAR and the different cameras, but at first that just looks like some sort of alien spaceship on the road. And now those little spaceships are everywhere. They’re all different kinds of companies, they’ve got different makes and models, but I was just walking around the ASU campus in Tempe yesterday, and these vehicles are still everywhere. So it went from being kind of a novelty to now it’s like you’re almost used to seeing them on the highways and the roads of our towns.

Gordon: Did people have a heads up that driverless cars were going to show up, or was it a bit of a surprise to folks?

Jenkins: Well, that’s one of the things that maybe this Guardian reporting has brought up, but here in Arizona, our governor has always been very supportive of these kinds of things, especially anything that might be tech oriented or something he can do to lure businesses from California. So I remember there was a statement in 2016 where he accused California of quote, “putting on the brakes of innovation.” And so the governor welcomed this self-driving truck full of the self driving cars when it came from California to Arizona. So I think it’s always been seen as something that the state was promoting and certainly not hiding from.

Gordon: Now how much of a political hot potato does the governor have on his hands?

Jenkins: Well, I think it was evident, there was such a huge outcry from everyone here after this last accident happened that the governor did come out and say he was suspending Uber’s ability to operate here. But he didn’t shut down autonomous driving programs overall. So I think maybe that’s the political calculation that’s being made there, because Gov. Ducey prides himself on [Arizona] being a state that does not have a lot of regulation, and I think that is the attempt to draw businesses here. It would be hard for him to go back on that, so I think in a way here he’s tried to keep it relegated to just this one company. But overall the practice remains.

Gordon: I’m going to ask you to prognosticate just a little bit based on your reporting on driverless cars in Arizona. What do you think the future looks like?

Jenkins: Well, I think simply because of the number of car companies that are here and invested and operating, I think we’re still going to be a hub for this. My colleagues have done reporting on how this is a great place to do car testing as well. So there are so many factors that keep this industry here, at least based in the Southwest, that I think even if you have these regional changes as this grows, I think it’s always going to be probably a part of the Southwest because it’s just so heavily entrenched here. I mean, I know I said it before, but you literally see these cars everywhere. And I just, I can’t imagine that they’re going to go away anytime soon.