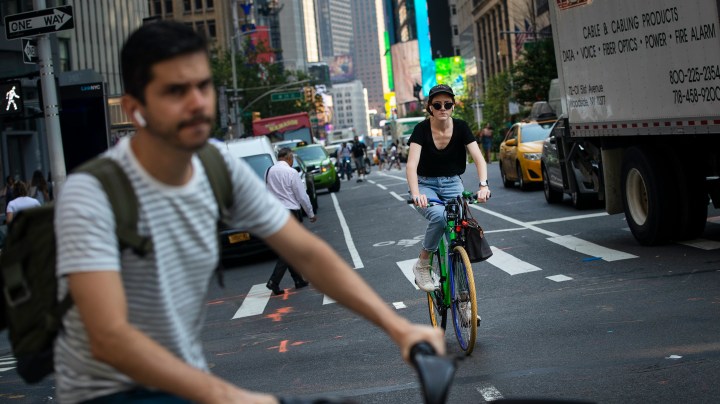 In the world of social media stars, Vignesh Swaminathan may seem like an unlikely one. He’s a civil engineer and CEO of Crossroad Lab, a Northern California company that specializes in feasibility studies and intersection design. He spends his time in storm drains and studies things like the role of structural racism in potholes.

But on TikTok, Swaminathan is Mr. Barricade, crusader for bicycle and pedestrian-friendly streets. Mashing beats from Kid Cudi with some signature dance moves and short lessons on roads and bridges, among other things, he’s amassed more than 400,000 followers.

You can see some of his creative handiwork at the corner of Fourth and San Fernando streets in downtown San Jose, California. Swaminathan helped redesign this bustling intersection into a bicyclist’s safe space, with bike-only traffic signals, protected bike lanes and inflatable barricades pretty much everywhere.

Like other transportation engineers, Swaminathan begins any project by dutifully consulting the federal Manual on Uniform Traffic Control Devices, known among urban planning nerds as the MUTCD.

And then sometimes, especially when it comes to things like how bicycles and pedestrians are supposed to interact, he has to deviate from it.

“I’ve read through the MUTCD well. I’ll put in additional extra, extra safety elements,” said Swaminathan. “And that’s how I feel comfortable messing with the MUTCD.”

Pedestrian and bicycle-safety advocates don’t want to just mess with the latest edition of the MUTCD, which awaits formal adoption by the Department of Transportation. They want the manual rewritten almost entirely to reduce its heavy bias toward cars, which still rule the road when it comes to the manual.

“By sort of tradition and fiat, [the MUTCD] is mostly geared towards the way drivers use the streets, and it thinks of other users as other users,” said Zabe Bent, director of design at the National Association of City Transportation Officials.

That “tradition and fiat” dates back to the 1930s, when the MUTCD was first created.

The goal then was fairly basic: Road signs and traffic signals should look the same whether you were driving your Buick Roadster in Boston, California or anywhere in between.

But over the years, the manual has morphed into a sprawling 862-page traffic engineering bible, dictating everything from the width of lane dividers to the proper size and markings for a crosswalk. When the city of Ames, Iowa, repainted a crosswalk in rainbow colors to celebrate Pride, the Federal Highway Administration chided the city for violating the MUTCD.

The MUTCD says local governments should base speed limits on something called the 85th percentile rule: the speed at or below which 85% of drivers would travel in free-flowing, unfettered traffic.

“The stance has always been that motorists given to their own devices would pick a prudent speed at which to drive,” said Steve Oliver, director of streets for the city of Garland, Texas, and part of the team that updated the 2021 version of the MUTCD.

Pedestrian and bicycle safety advocates object to that methodology and say some tweaks to the rule in the latest MUTCD don’t go far enough.

City traffic engineers can work around the MUTCD to make design decisions they think make more sense for their communities.

But there’s an expensive reason they often don’t: liability. Deviating from the MUTCD may require an engineering safety study to justify any changes.

Unsafe streets may stay unsafe simply because they comply with the manual. It’s just easier and cheaper that way.

What warrants a new crosswalk with a traffic signal is another bone of contention.

Justifying a crosswalk with a stoplight

While the exact requirements vary by street type and location, the MUTCD requires roughly 100 pedestrians per hour crossing a street, or multiple accidents involving pedestrians, to justify a crosswalk with a stoplight.

Pedestrian safety advocates argue that logic is circularly flawed — you won’t get 100 pedestrians an hour crossing an unsafe street. And cities should not have to wait until someone is killed by a car to fix an obviously unsafe intersection.

Oliver, the Texas engineer who worked on the 2021 MUTCD update, said he understands many of these concerns. But he cautions against scrapping the manual entirely.

“If you reframe and rewrite, it’s almost kind of throwing out the baby with the bathwater, and you’re starting all over,” he said.

The Department of Transportation is reviewing the updated manual. Secretary Pete Buttigieg hasn’t weighed in yet. It might be something for him to think about while he bikes into work.