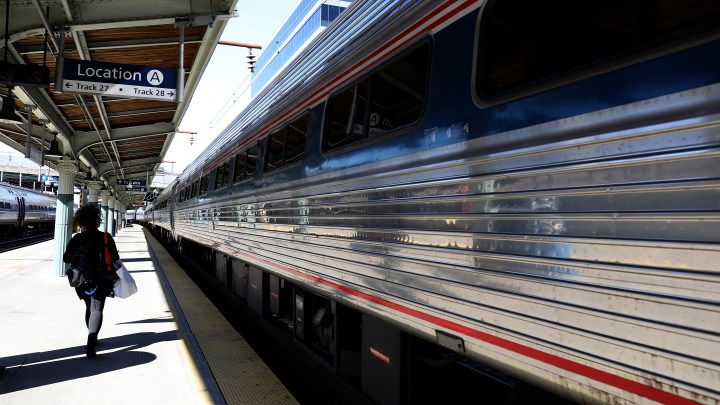 COPY
A passenger walks next to a departing Amtrak train at Union Station in Washington, D.C. Rob Carr/Getty Images
COVID-19

A passenger walks next to a departing Amtrak train at Union Station in Washington, D.C. Rob Carr/Getty Images
Listen Now

Joe Biden is set to embark on a campaign trip through eastern Ohio and western Pennsylvania on Wednesday. The Democratic presidential nominee has the nickname “Amtrak Joe,” so it should come as no surprise that he’s conducting the trip by train.

Earlier this month, Amtrak CEO William J. Flynn told Congress that the railroad needs nearly $5 billion in federal assistance to help make up for losses caused by the coronavirus pandemic. In the meantime, Amtrak is planning to scale back many of its long-distance routes including the Capitol Limited, the California Zephyr and the Texas Eagle from daily departures to three times a week.

At least nominally, Amtrak is a for-profit business.

“But it’s really run more like a public service,” said John Macomber, senior lecturer at Harvard Business School. “It has a material subsidy each year from the federal government of equal to about a third of its operating revenues.”

That material subsidy is about $2 billion.

Before the pandemic, Amtrak’s finances were not all that bad. In fact, last November it announced its smallest-ever operating loss of $29.8 million.

“With COVID-19, ridership is down significantly,” said Baruch Feigenbaum, managing director of transportation policy at the Reason Foundation.

Down 80% from a year ago. That’s one reason Amtrak is planning to furlough nearly 10% of its workforce and cut some of those long-distance services.

“Amtrak’s long-distance service loses a lot of money even in the best of times,” said Feigenbaum. “And so now we’re talking about really significant losses that they just cannot sustain.”

Amtrak has already received $1 billion in COVID-19 relief money, and Feigenbaum said additional federal funding is not a good investment.

But Jim Mathews with the Rail Passengers Association said Amtrak’s service cuts could cost the interior regions of the country billions of dollars.

Matthews believes Congress should step up with additional funding.