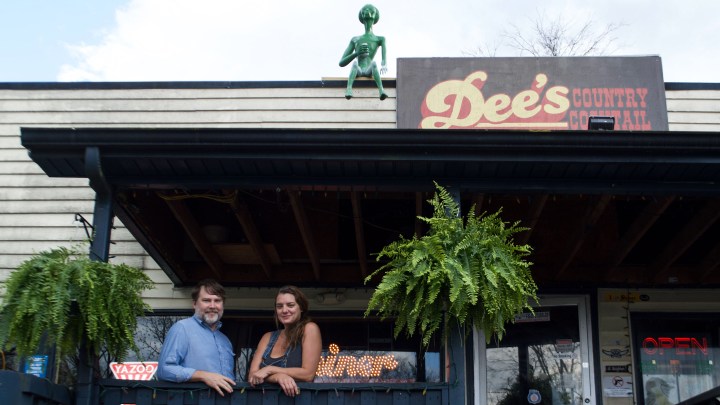 Dee’s Country Cocktail Lounge is a self-professed ’70s-inspired “dive,” with a modest stage and a less modest disco ball. The roughly 100-person venue shut down mid-March 2020, and stayed that way for five months because Nashville’s capacity limits made it too costly to reopen.

Now that things are starting to open again, co-owners Amy Dee Richardson and Daniel Walker wish the city would step up and better support music venues.

“I would like to see some more help coming from the government in the observation that, ‘Hey, we are Music City, so let’s go ahead and protect our musicians, our artists and the venues that support those musicians more,’” Walker said.

Other city governments around the country have done that. New York is helping with an effort to pay artists to do hundreds of pop-up performances on the streets as well as to play at vaccine sites. Chicago’s mayor launched a year-long effort to connect the city’s artists with paid gigs, including a new festival designed to honor the city’s diverse musical history.

So far, Nashville –– which is indeed known as Music City –– has not. That’s pushed Nashville’s independent venues and musicians to try and navigate reopening on their own.

Musician Colleen Orender started playing at Dee’s again to small audiences. She says the city didn’t do enough to let people know that there are ways to safely see shows. “Music is a draw for everybody that comes to Music City, that’s what we are called, so they should have figured that out first,” Orender said.

The mayor’s office said the local vaccine rollout should trickle down to benefit musicians and venues. But the city still lags behind the national average for vaccine rates.

Nashville does have a fund it uses every year to solicit ideas to bring visitors to Nashville. This year that fund, which comes from hotel taxes, is estimated to be about $2 million in size –– with fewer people stayed in hotels during the pandemic, the pot is smaller than usual. One idea from a local nonprofit group, Sow Good, is to have a concert series.

The city will decide how to use the funds in late June.