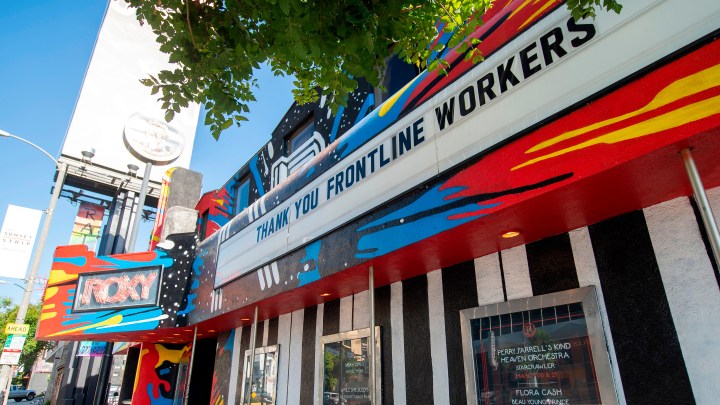 COPY
The closed Roxy nightclub and music venue on the Sunset Strip in West Hollywood, California. With many performance venues shuttered, musicians have fewer opportunities to develop their sound. Valerie Macon/AFP via Getty Images
COVID-19

The closed Roxy nightclub and music venue on the Sunset Strip in West Hollywood, California. With many performance venues shuttered, musicians have fewer opportunities to develop their sound. Valerie Macon/AFP via Getty Images
Listen Now

Clarksdale, in the Mississippi Delta, is known as the birthplace of the blues. This music has been played there for generations in homes and juke joints and gathering places of all kinds. And every year, thousands of people from all over the world come to hear it. So Clarksdale spent the past two decades redeveloping its downtown around blues tourism.

You could have heard live blues 365 nights a year in clubs and juke joints. Then came COVID-19.

“It has impacted everything from the sales tax that’s paid, which affects the city of Clarkdale’s budget, the county, all the moms and pops. It has been a disaster,” said Roger Stolle, the head of the tourism commission in Clarksdale. He also owns Cathead Delta Blues and Folk Art, a music venue and shop.

Stolle said the loss of nightly local shows has had financial consequences for the whole area.

Live music, and the economy surrounding it, has had a hard year. Beloved, long-running venues have closed during the pandemic, such as the Jazz Standard in New York, the Satellite in Los Angeles and U Street Music Hall in Washington, D.C.  And there are hundreds more.

There was welcome news for fans as 2020 drew to an end — $15 billion in federal funding to help struggling independent music and theater venues.

The National Independent Venue Association, a group of nearly 3,000 establishments, had been lobbying for federal assistance.

“Just because we’re shuttered doesn’t mean that we don’t have rent and mortgage, utilities, insurance and taxes to pay. We do,” said Audrey Fix Schaefer, a spokesperson for the group. She called the relief package a “lifeline.”

Even so, temporary closures bring another kind of loss.

“Music venues are the talent incubators of our sector,” said Shain Shapiro. He’s with the consulting group Sound Diplomacy, which works with cities to build their nighttime economies.

“When you don’t have the places and spaces that are incubating grassroots talent, it creates a significant gap in what we would call the talent development ladder,” Shapiro said.

This loss of opportunity feels personal to Tobi Parks, in Des Moines, Iowa.

She owns xBk, a venue that hosts folk, rock and spoken-word events.

“That’s all really incremental revenue. You know, it’s not like we’re going to be able to sell our $25 T-shirt at, you know, 200 people a night,” Parks said.

Her monthly overhead is $8,000. Recently, another Des Moines venue closed.

And xBk, Parks’ place, will eventually feel that loss. She said touring musicians are less likely to pass through a city with a smaller music scene.

Parks has seen all sides of the music business. She’s been in bands herself, she’s worked at a major label and she’s also a lawyer with experience in licensing and royalties.

She’s been doing legal work throughout the pandemic. The money she’ll get from the relief bill, maybe up to $95,000, she said, is huge — the difference between surviving the pandemic and closing for good.