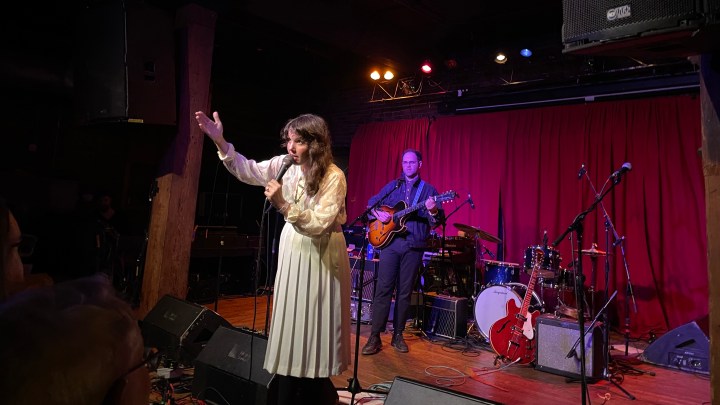 Nashville artist Tristen Gaspadarek stood on stage in front of an emotional crowd.

It was her last show at Mercy Lounge, and in between songs she told stories about the role this space has played in her journey as a musician. First, she saw shows here. Then, she played shows here. She even met her husband and bandmate here, 15 years ago.

Local musicians held farewell shows at Mercy Lounge in the weeks leading up to its closure in May.

It was a cozy little club — standing room only, big enough for an audience of 500. Bands like The Black Keys and Band Of Horses played here before they got big.

“Growth is not always progress, money is not meaning, and amenities are not culture,” she said.

The building that Mercy Lounge had been in for two decades was bought up by a local property management company. The operator of Mercy Lounge said they couldn’t reach a lease agreement, but wouldn’t comment further.

Other small independent music venues in Nashville are also facing this same fate. Venue operators usually don’t own the spaces they inhabit, so when the building gets sold, the rent may rise and they may be forced to move.

Small independent music venues are a vital part of a creative economy. They’re where artists can book their first gigs before moving on to bigger venues.

These venues take chances on new artists before they’re profitable. Cobb said he doesn’t believe the property management company taking over the space, DZL, will do that.

DZL officials declined to be interviewed. In a press release, DZL said it’s committed to preserving the space for local artists. It plans to renovate and then start hosting shows at the end of the summer.

While the closure of small music venues has been going on for a while, the city of Nashville has started to take notice. “Government operates pretty slow,” said Metro Council Member Jeff Syracuse.

He said he hopes two recent changes could help indie operators: One is the return of the defunct Music City Music Council, which was a board of industry professionals who worked with the city to attract events and development deals. The second is the creation of a new Office of Music, Film and Entertainment to keep creative jobs local.

“If we don’t be a little more intentional and thoughtful about how we support working creatives in the city, we can lose it,” Syracuse said.

Plenty of other places would gladly take up the mantle of being the new “music city,” he said, if Nashville doesn’t step up to protect its indie venues and music culture.