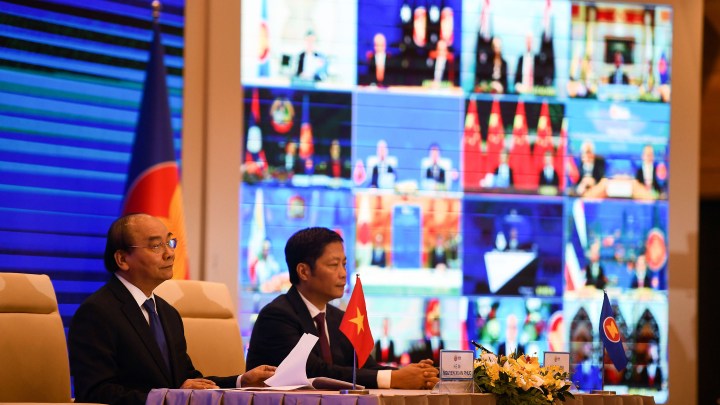 Fifteen Asia-Pacific countries have signed a major China-backed trade deal that excludes the United States. It’s called the Regional Comprehensive Economic Partnership, and it forms the world’s largest trading bloc, covering nearly a third of the global economy. China could be a big winner here.

Marketplace’s Nova Safo has more, and the following is an edited transcript of his conversation with “Marketplace Morning Report” host Sabri Ben-Achour.

Sabri Ben-Achour: Fifteen countries are in this deal. What do they get out of it?

Nova Safo: Lower tariffs over time — we’re looking at the next decade or two. The deal overall, analysts say, will not make huge changes in trade between these countries, in part because tariffs are already low between many of them and also the deal is limited in scope.

But the idea is that these countries — among them China, Japan, Australia, South Korea, Vietnam — would eventually stop taxing some of each others’ exports to incentivize doing business with each other — for example, building products across factories in multiple countries.

The U.S. does this now in its trade deal with Mexico and Canada. The European Union does it, too.

This Asia-Pacific partnership would eclipse both of those alliances, just with its sheer size: $26 trillion in economic output. It’s the world’s biggest trade agreement.

Ben-Achour: The U.S. is not in this deal. In fact, this deal was supposed to rival the Trans-Pacific Partnership, which the U.S. was at the center of, before the Trump administration pulled out. So what does that mean? What does this deal achieve?

Safo: Well, it’s the inverse of the TPP. China was excluded from the TPP, which was supposed to be a counterweight to China’s economic power in the region.

Now with this deal, China is squarely at the center. It’s the second-largest economy in the world, and the biggest one in this pact.

It potentially could see itself having a lot more influence with the countries involved, and less reliance on trade with the U.S. down the road.