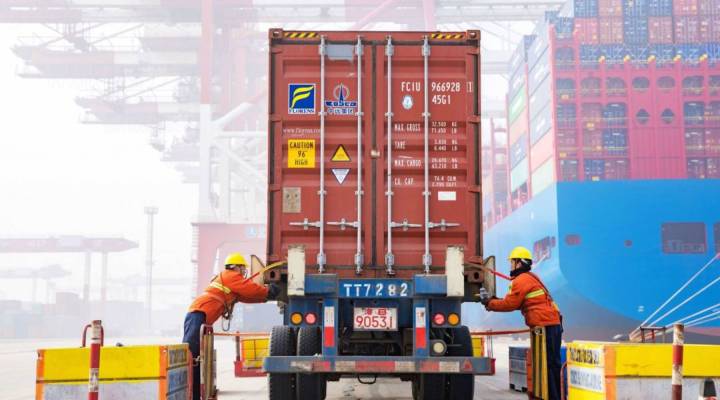 One of the aftereffects of globalization and global trade was companies moving their production — and therefore jobs — to countries where the labor is cheapest. But that dynamic is changing, according to a McKinsey Global Institute report. Exploiting low-cost labor accounts for just 20 percent of global trade, and the share is shrinking every year. The whole global trading system is evolving. Trade in goods, where developing lower-wage economies might have an advantage, is being outpaced by trade in services, where advanced economies have the upper hand.  And trade isn’t as central a part of the global economy as it once was. Susan Lund, head of the McKinsey Global Institute and one of the authors of the study, spoke to Sabri Ben-Achour about the change in global trade relationships and what it means for advanced and developing countries. Below is an edited transcript of their conversation.

Sabri Ben-Achour: So let’s start off with this phenomenon that you’ve observed. The volume of international trade is growing, but when you look at the total amount of things and stuff and services cranked out by the world’s economies, a smaller and smaller percentage of that is traded. The share is shrinking. Why?

Susan Lund: Well, that’s right. Globalization is really entering a new and different chapter than what it used to be. So the declining share of goods that are actually traded really reflects changes within China’s economy and other developing countries to a lesser extent. We have a big consumer class of Chinese consumers and Indian consumers and those in other parts of the world. And that means that they’re now buying more of the goods that are produced within the country. So overall we see China, for instance, used to export 16 percent of the goods it produced. Well, now it exports 9 percent, and because of China’s size, whatever it does has big effects on global trade patterns.

Ben-Achour: Is this a healthy change? Is it a threatening change? How should we think about it?

Lund: Well, it’s a very healthy change in terms of the fact that poorer countries are maturing, they’re getting richer, their people have more income to spend. They’re also developing their own local supply chains. Now if you’re a port operator, it might be a less good sign. Although I will note that, look, the absolute dollar value of trade continues to go up just because the world economy is growing, but countries are becoming more localized. We’re consuming more of what we produce within countries rather than trading across borders.

Ben-Achour: Now economists will tell you that international trade leaves countries better off. You know, they can prove that mathematically in every introductory global finance class. But there are plenty of people who, when they talk about trade in the real world, they see a system where jobs are stolen or one where companies just look for the cheapest labor and loosest labor rules. Your research suggests that this latter view is really becoming increasingly outdated. Why?

Lund: That’s right. So in the last era of globalization, that is what gave rise to the long-haul trade we have between Asia and the U.S. and Asia and Europe. And the offshoring trend, we can see now, really hurt individual workers and communities in the U.S. and Europe, but that wave has largely passed. Increasingly, manufacturing has becoming automated, and so labor is just less of an important factor in where you choose to locate production. Because of automation, companies are now focusing on other things, like where can you find a talented workforce, and are you close to the end-consumer market so you can get new goods to market as fast as possible and you can be flexible and respond to changes in consumer trends? And all of that actually means you don’t want to produce on the other side of the world and chase the lowest wages, but instead either produce within your own country or at least close by the major consumer markets around the world.

Ben-Achour: Does that change who has the advantage then because, you know, it used to be that a developing country could say, “Hey, we have very cheap labor here.” But it sounds like perhaps having a skilled workforce is more important these days.

Lund: It is. Many of the trends that we discussed in our new report really favor the advanced economies because they have strong innovation in [research and development], they have more skilled talent, they have better infrastructure. So we do see that in many global value chains production is shifting towards those large consumer markets. Now remember that China is also a large consumer market. So there’s, you know, a possibility for Southeast Asian countries to export into China. But for the developing countries that maybe didn’t participate in this last wave of globalization so much, they’re going to have a more challenging time ahead.

Ben-Achour: Now it’s easy to assume that trade means goods. You know, the orange from Spain, the bicycle from China, the blender from Germany. The current administration almost always only looks at trade in goods, but that is completely ignoring services, which you suggest we should really not be ignoring.

Lund: That’s right. In fact, even the concept of services versus goods is shifting. So when we look at services trade, we see it’s growing 60 percent faster than goods trade, and many specific types of services like business services and [information technology] services are actually growing two to three times as fast. So while the world is becoming less trade intensive in goods, services are exploding.

Lund: Yes. If anything, look, the backlash is understandable. What’s very clear now is that while the benefits of the last chapter of globalization were widely shared, the costs were really localized in very specific communities and individuals. And we didn’t do a very good job at addressing those costs. But at the same time, the irony in our research is that now is exactly the wrong time to start preventing further global trade because countries like the United States now stand to benefit both by exporting to those new consumers in China and the rest of the world as well as by, you know, continuing to build on their expertise and service and high-tech industries that are now dominating global trading patterns.