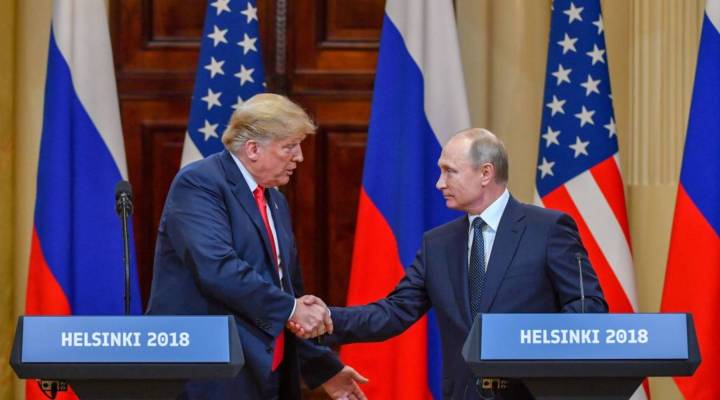 The U.S. has a certain brand image globally. That brand will be different to each person, but the way that brand appears is important for businesses abroad.

President Donald Trump’s recent performance on the global stage may be putting that brand through some tough times. He referred to Europe as a ‘foe’ while visiting Prime Minister Theresa May in the United Kingdom last week, and at his summit in Helsinki earlier this week, he sided with Russian President Vladimir Putin over U.S. intelligence agencies before reversing his position on Russia’s possible interference in the 2016 presidential election.

Ian Bremmer, founder of the political risk consultancy The Eurasia Group, spoke with Sabri Ben-Achour to explain how all this might affect America’s brand globally.

Ian Bremmer: As a brand, I’d say the last week probably hasn’t mattered anywhere near as much as all of his anti-immigration talk. All of those things which make foreigners feel unwelcome. Tourism is, of course, down in the United States since President Trump took over despite the U.S. economy performing very well. International applications to universities in the United States, which are full freight because they’re paying their way, so it’s important for the university’s bottom line, but also these are people who are among the best, the brightest [and are] bringing American ideas back to their own countries. That hurts, too. So I think that the long-term damage to the foundations of America’s brand strength are impacted more than the idea that Trump goes to Europe and sort of annoys the Europeans and as a consequence they’re going to start suddenly taking cash away from the U.S. It doesn’t quite work that way.

Sabri Ben-Achour: If we take the longer-term influence that you reference, do you think that could actually affect Americans trying to do business with the rest of the world?

Bremmer: Yeah, definitely, because if foreigners and foreign governments don’t think the Americans can be relied upon, then leaving aside the issue of tariffs and trade war, you also have the fact that more countries will end up doing more business with China because they are the world’s largest economy, and they’re certainly saying they’re open for business even if their standards are very different. They’re writing very big checks internationally. They’re willing to pay a lot of money for the top talent, and over the long term, that obviously makes it a lot harder for U.S. businesses to be considered. So the preference for international trade.

Ben-Achour: Well, one possible example of what you’re talking about is the fact that we’ve seen our allies entering into trade deals between one another to which the U.S. is not a party. Is that going to hurt the U.S. and should we expect more of that going forward?

Bremmer: Yes and yes. It’ll take a long time. You’re probably referencing in particular the Japan-EU deal that just got inked. You know, the impact that’s going to have is going to be marginal and long term. But, you know, when the United States doesn’t do the Trans-Pacific Partnership, which was Trump’s first big foreign policy move once he became president, those countries that would have been more deeply aligned with the United States on more advanced trade standards, like on services, for example, and on data, that doesn’t happen. And instead they do lower standard deals. And again they do them with other countries and increasingly with the Chinese, which will surpass the United States as the world’s largest economy in the next 10 years. It’s not like you have Trump as president 20 years ago when if it wasn’t the United States, other countries really didn’t have choices. There are choices out there right now. They’re not preferred choices, but Trump’s doing everything possible to make them look increasingly attractive. And the real issue here is that while there’s no challenge to the U.S. economy for attractiveness today — it’s the world’s largest economy, we have the world’s reserve currency, we’re the world’s largest food producer, we’re about to be the world’s largest energy producer and the economy’s doing really well — it’s very unlikely to maintain that level of dominance over the next 10 years when you have this kind of self-inflicted damage done by the United States.