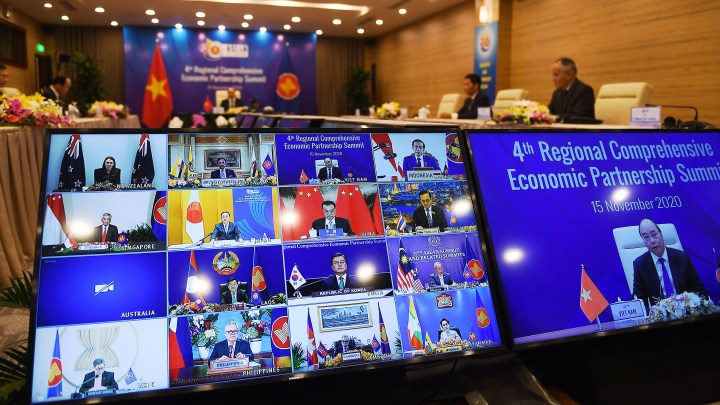 China and 14 other Asia-Pacific nations — including economic powerhouses Korea and Japan — signed a trade deal Sunday that covers a third of the global economy. The U.S. was not a part of it, and economists fear the agreement signals further loss of U.S. economic power and opportunity on the global stage.

Long story short, a group of Asian countries came together and opened their markets to one another — and the U.S. is on the outside looking in.

“I think it’s a wake up call for the United States,” said Wendy Cutler, vice president of the Asia Society Policy Institute. The Regional Comprehensive Economic Partnership, or RCEP, is, as trade deals go, modest. But it further connects powerful economies like Japan, Korea and Australia to China. And that’s actually huge, said Jennifer Hillman, senior fellow at the Council on Foreign Relations.

“It is China getting solidified as the center of Asian investment with more goods, services and investment than ever, flowing through China,” she said. “And I think the United States is going to have to respond to it.”

The U.S. has responded to Chinese influence over trading partners before. The Obama administration negotiated and signed the Trans-Pacific Partnership. That was a comprehensive trade deal with Asian countries that left China out. Trump torched that deal.

“These countries were left out in the cold, and now they are moving towards a lesser agreement with China,” said Francesco Sisci, a researcher at the People’s University of China.

“Japan signed a free trade agreement with the European Union; the EU did one with Canada; the EU is doing one with South America,” he said. “The United States has been falling behind, and this is just the latest example.”

He’d advise the Biden administration to revive, modify and rebrand the TPP. A tall order given everything else on the to-do list.