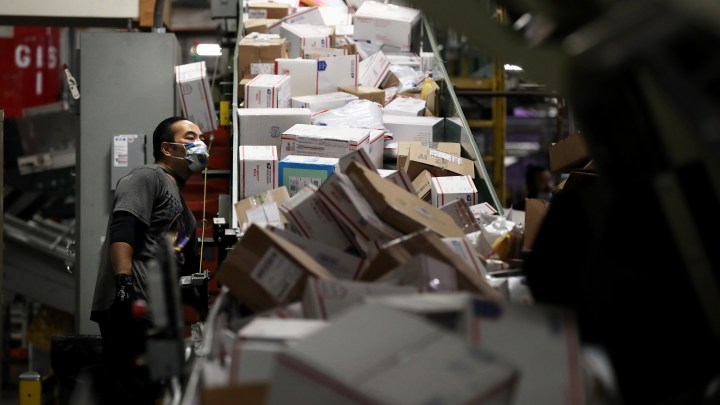 COPY
A postal worker monitors packages at a processing and distribution center in April in Oakland, California. Justin Sullivan/Getty Images

In a pandemic, retailers kind of have to take the sales they can get. But the expected shift to online shopping over the holidays this year is going cost them.

“If it’s a very small box, it could be in the cents. If it’s a very large box, it can be dollars,” said Brian Smith, an executive at Georgia-Pacific, which makes corrugated cardboard boxes.

Box orders for online retail are up by more than 30% compared to last year, he said.

“It’s certainly been a challenge, because we’re taking extraordinary steps to keep all of our employees safe, which can slow production down considerably,” Smith said. “So sometimes it involves running extra hours and into weekends to keep up with demand.”

Also, the company’s paper mills are running at full capacity. And Georgia-Pacific has been buying the paper it uses to make boxes from small suppliers when it can’t make enough.

On recent earnings calls, other cardboard box makers have also said demand is off the charts.

We’re not seeing a shortage of cardboard boxes in the U.S. at this point, said David Marcotte, a consultant with market research company Kantar. But with COVID-19-related shipping delays, it might be tough to get all the boxes to retailers when they need them.

“The boxes have to be shipped from the manufacturer to whoever is going to be using them, be it Amazon, Target, Walmart, etc.,” he said.

One scenario: If a worker at a warehouse doesn’t have the right-sized box handy, they could use the wrong size. You ever order a bottle of hand soap online and it shows up rolling around in a box that could fit a pair of knee-high boots?

“When things are getting pressed, and things are going quickly, and they can’t grab the box that’s really suited for a box of soap, they’ll grab whatever box because [they say] ‘I got to keep the line moving,’” Marcotte said.

Using a bigger box costs a little more — and it doesn’t always go over so well with customers who see it as wasteful.