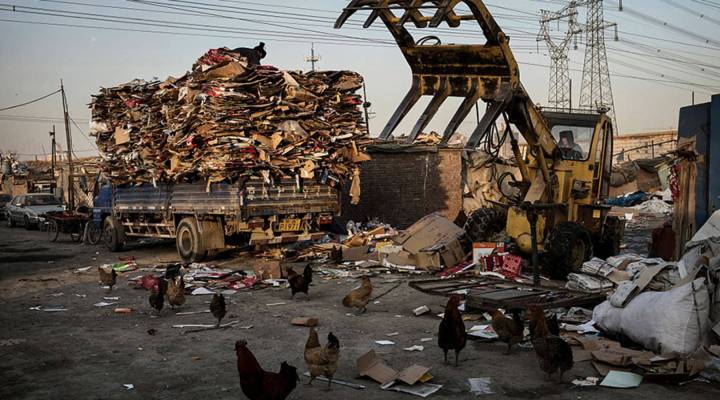 COPY
Chinese laborers load cardboard onto a truck to be recycled in the Dong Xiao Kou village in Beijing in 2014. Kevin Frayer/Getty Images
Marketplace Tech Blogs

Chinese laborers load cardboard onto a truck to be recycled in the Dong Xiao Kou village in Beijing in 2014. Kevin Frayer/Getty Images
Listen Now

E-commerce is creating a cardboard nightmare. The rise of Amazon and the like has left a deluge of packing waste in many of the world’s largest economies. None more than China, where more than 40 billion packages were shipped last year. That number will likely increase as the Chinese economy grows. There is some pressure on retailers to use less material in their packaging and to switch to reusable alternatives. Marketplace Tech host spoke with our China correspondent, Jennifer Pak, about how China will cope with the pending cardboard apocalypse. The following is an edited transcript of their conversation.

Jennifer Pak: Well, if we’re talking about retail e-commerce, we’re looking at about 6 to 7 percent of the GDP here. And you can really feel it on the streets. When you’re walking here, delivery guys are zigzagging through cars, squeezing between people on the sidewalks when they’re balancing these big boxes on the baskets in the back of their electric bikes, between their legs. So, in 2017, we’re looking at roughly 40 billion packages. That amounts to maybe two packages per month for every single person in China.

Molly Wood: I assume we are talking about a lot of cardboard waste in that case, right?

Pak: Yes, a lot. I recently bought a mic stand for this studio, and I had to first cut through a plastic bag, then a box to get to the original box, which was then filled with tiny, flimsy plastic wrapped around each part of this mike stand.

Wood: You and I are talking about, but is it considered a problem that the Chinese government or anybody else is trying to solve?

Pak: Yes. They’re setting up a regulatory system for this. They have some policies to support what they call “green packaging,” like tax incentives. And they have a goal that by 2020, half of all packages will have an outer layer that is biodegradable, and also they want to cut back packaging material inside the boxes by about 10 percent

Wood: There are some private companies that are trying to tout the benefits of reusable packages. Is that a move at all that you’re seeing in China either from the private sector or or the government?

Pak: Yeah, I did read that JD.com and Suning, they’re big competitors of Alibaba’s Taobao here, they are looking at reusable plastic boxes that do not have the logos, so that means that different companies can share between them. I personally have not really seen them, but you have to keep in mind that a lot of the vendors that are on these online platforms, they’re looking for good ratings, good comments, right? And that’s one of the criteria for a lot of customers that I’ve noticed. They will say, “Oh, I received this package and it’s wrapped so nicely and it’s great.”

Wood: So how do you think that could affect the move toward, say, reusable packaging? I mean, it seems like that could be a positive that they would focus on, you know, easier and nicer packaging, or would it just not matter if it got dropped in the street off an electric bike?

Pak: Well, I mean, customers are becoming pickier now, and even if they’re paying just a few dollars or even $1 for an item, they’re looking for a good service. You have to realize that the government is pushing for people to consume more. So you may have a program to cut back and recycle more. But ultimately, people are consuming more, so you’re going to end up with a lot of waste here anyways.