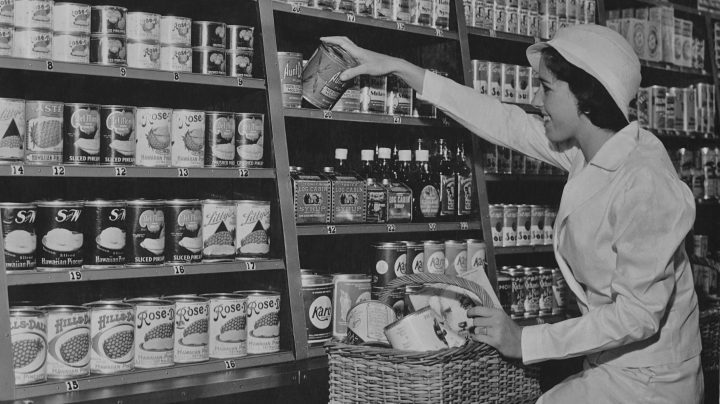 COPY
In this excerpt from his new book, "The Secret Life of Groceries: The Modern Miracle of the American Supermarket," author Benjamin Lorr writes that innovations in canning and cardboard technology made modern grocery stores possible. Keystone View/FPG/Getty Images
Shelf Life

In this excerpt from his new book, "The Secret Life of Groceries: The Modern Miracle of the American Supermarket," author Benjamin Lorr writes that innovations in canning and cardboard technology made modern grocery stores possible. Keystone View/FPG/Getty Images
Listen Now

Grocery stores and their employees gained newfound respect from Americans this year when the mundane chore of shopping for food became a hazardous event. But American grocery stores, with their aisles of consumer products culled from all over the world, have long been a miracle of modern commerce.

“Marketplace” host Kai Ryssdal talked recently with author Benjamin Lorr about his new book, “The Secret Life of Groceries: The Dark Miracle of the American Supermarket,” and what the pandemic means for grocery stores long term. Click the audio player above to hear the conversation. The following is an excerpt from the book.

In the beginning, there was the general store, center of the retail world. Selling dry goods alongside clothing and hardware, the general store has about the same relationship to the supermarket of today as a baboon does to a human. About two-thirds the size of a convenience store, it was typically staffed by two to four male clerks, working for a dollar a day, dressed in vest and tie in more urban areas—like Kansas City—or just overalls and a hat in a slightly more agricultural one—like Yonkers. The clerks would wait on customers individually from behind a counter. Everything for sale was on display but untouchable: the walls jammed with boxes of clothing, boots arranged soles out, a hanging basin or two. On the counter, big jars filled with Imperial Cookies, coffee, crackers, and tobacco. Next to them, a balance scale ready for measuring grain. Beyond that, the “drug corner,” opium, rhubarb, laudanum, turpentine, in little vials. And on the floor, barrels: flour, sugar, molasses, and dried fruit. Fresh produce was scarce and exclusively seasonal.

Perishable food was available, although the specifics were highly regional. The meat market was probably the most common of these purveyors. Meat streaming down from the ceiling, sausages layered thick like beaded curtains against one wall, against another, whole birds— strung by their feet, heads off—in a wide range of sizes. Below the birds, hanging thick and rectangular like wooden shutters, pork ribs, cut in blocks. The counter here would be low and covered in pale hardwood, functional for chopping, unlike the chest-high operation at the general store, and decked out with a decisive-looking cleaver, about the width of a man’s face, along with several other slender knives for deboning, trimming, and picking. Next to the knives, little steel enameled pans for the vitals: the eggplant-black kidneys and mollusk-like chicken hearts. The whole place was a mess of flies, buzzing away, always landing on the meat except where ammonia or other preservatives scared them off. And in the center of it all, the butcher: white apron over jacket over tie, probably with a mustache the size, shape, and ferocity of a shoe shine brush. Next to him but lower, the resident cat to kill the menagerie of rodents who coinhabited the place.

These two pillars of grocery life were rounded out by smaller venues depending on the size of the community, perhaps a corner fruit store, or maybe a “spa” with a soda fountain and candy in glass jars. Cities often had a “public market,” stalls of vendors selling to different classes of citizens at different times of day. And, on the periphery in every com- munity, a jumble of horse-and-wagon peddlers: rolling around hawking specialty items like exotic fruits (i.e., bananas), baked goods, and milk courtesy of the milkman. Bargaining and haggling were common. Prices were typically unmarked, and clerks would almost always charge wealthy customers more for the same item, though usually by giving them access to first-cut produce or fresher meat. With every item located behind the counter, the uneven quality that marked every shipment allowed natural price tiers to develop. The indigent and poor would be allowed to buy the rot everyone else had passed over for pennies.

Once a price was settled on, transactions at the general store were handled almost exclusively on credit. This in turn created a fierce loyalty to particular stores. In rural areas, families might shop daily but only settle up once or twice a year. For farmers, this typically coincided with harvest. Obviously the massive reliance on credit put everyone in a very precarious place. One early supermarket owner remembers his father’s general store going bankrupt when the boll weevil destroyed local cotton crops for three years straight. His customers simply couldn’t pay him for the food they had already purchased. But this reliance on credit also fostered a natural connection to the agrarian economy. The grocer was linked to the farm by more than mere happenstance of the product he was selling; the farmer’s economic success determined his own.

Our current shopping experience arose from this premodern retail soup less from a singular stroke of insight and more in the same halting fashion of biological evolution, several loosely connected shifts coming together to create a real change.

The first of these was technological. Forget the invention of the wheel. When it comes to technology that we assume was omnipresent and everlasting, what about the box? Paperboard, the handmade precursor to cardboard, was used for commerce only in 1817. Prior to that, cartons and vessels existed, of course; wine had been stored in amphora since the Greeks, apples in giant wooden barrels, but these were burdens for trade to overcome: heavy, ungainly, expensive.

Then, in the 1850s, corrugated cardboard: paperboard folded vertically in arches and smooshed between two horizontal planes like a sandwich. The interior curve gives the material a disproportionate strength. And so inside every flap of cardboard is the science of the cathedral, ten thousand vaulted arches distributing compression, allowing pulp to transcend into something lightweight, rigid, and above all, cheap. It is the stuff of revolutions.

Its first use was in giving structure to gentlemen’s hats. Quickly thereafter, it is adopted for shipping boxes, though the first of these required a clerk to meticulously fold the cardboard around a wooden frame. It is slow and cautious work, item by item, until in 1890, Robert Gair of Brooklyn begins to manufacture precut, easy-to-fold boxes. The effect on the grocery store cannot be overstated: regular shipments of products suddenly make economic sense. Producer and retailer become connected in a far more consistent manner.

Alongside corrugated a similar revolution occurs on the level of the individual product. The flat-bottomed paper bag matures into its own during the Civil War when cotton is in short supply. A series of advances in canning allows the preservation of food to move from fragile, expensive glass jar to cheap and hardy tin. Card stock, the thinner brethren of corrugated, used for cereal and cracker boxes, is perfected on the industrial scale. Where containers were once handmade and laborious creations, they can now be pumped from conveyor belts: separate, individuated, and eager to take on whatever identity their label gives them. By 1900, the shift is momentous: packaged food is responsible for one-fifth of all manufacturing in the United States.

Modern life does not exist without this shift. Directly from the box springs the brand. From the brand the advertiser. From the advertiser, perhaps, ourselves. One of Robert Gair’s first clients was the National Biscuit Company, aka Nabisco, of RITZ Crackers and Shredded Wheat fame. The impossibly perfect so probably apocryphal story about their early negotiations illustrates the power in packaging: after putting in an order for biscuit boxes, Robert Gair’s own son tells the befuddled company “You need a name” to put on the otherwise bare box. Nabisco takes him literally and Uneeda Biscuit is born, the name slapped against the cardboard. It becomes a blockbuster. The original packaged-food fad. By 1900, Nabisco is selling over 100 million packages of Uneeda biscuits a year. A product previously sold only in anonymous bulk is differentiated by nothing more than a throwaway name. Nothing on the shelf of the grocery store will ever look the same.

Adapted from THE SECRET LIFE OF GROCERIES: The Dark Miracle of the American Supermarket by Benjamin Lorr, published by Avery, an imprint of Penguin Group, a division of Penguin Random House, LLC. Copyright © 2020 by Benjamin Lorr.