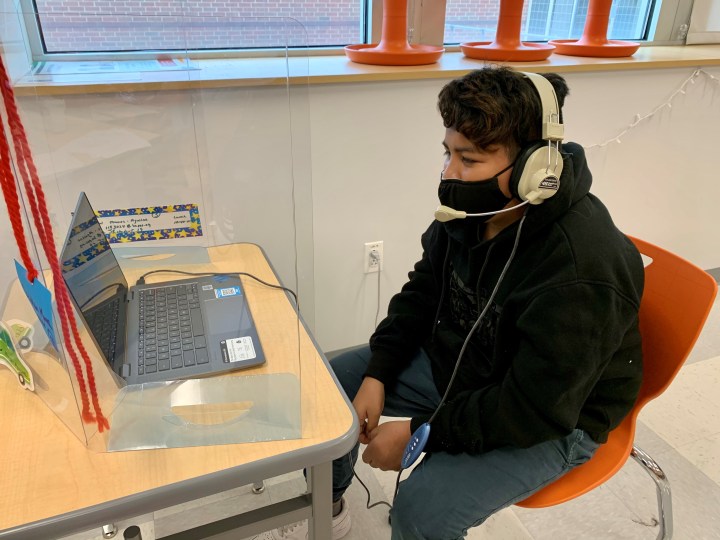 COPY
Christian Muñoz Aguilar sits at his workstation. The 11-year-old helped supervise his four siblings while trying to do his own schoolwork. Amy Scott/Marketplace
COVID-19

Christian Muñoz Aguilar sits at his workstation. The 11-year-old helped supervise his four siblings while trying to do his own schoolwork. Amy Scott/Marketplace
Listen Now

The first thing you might notice walking into John Ruhrah Elementary/Middle School in southeast Baltimore — after clearing the routine temperature check — is how quiet it is. On a normal school day, there would be around 850 students inside the massive brick building, reciting multiplication tables and chatting in the hallways.

But today is not a normal day.

“We have a total of 65 students,” said Catherine Drayton-Barber, an administrator of the Student Learning Center now located at the school. It’s one of 15 hubs the district opened throughout the city to serve students from kindergarten through fifth grade who struggled with remote learning. Priority is given to children who are homeless or have parents who have to work outside the home.

Many of the kids at John Ruhrah come from low-income immigrant families and have parents who are essential workers, Drayton-Barber said. “Students who don’t have the luxury of having access to internet,  computer access, a parent who’s in the home at all times.”

Here they have laptops, Wi-Fi, a safe place to be from 8 a.m. to 4 p.m., where they can get breakfast and lunch — and support. The classroom staff aren’t teachers. They’re district employees whose jobs got sidelined during the pandemic, like bus aides and hall monitors.

Jessica Henkin is normally a coordinator for early-childhood special-ed programs. She’d been working from home for months when she got the call in late September to come help run the center.

“It was extremely nerve-wracking to be asked to come back in,” Henkin said. “I kept on thinking, well, I just don’t know if city schools, which before COVID struggled sometimes to keep soap in bathrooms, would be able to keep us safe, but we have been just so pleasantly surprised by how they’ve come through.”

There have been a couple of COVID-19 scares, but so far no positive cases, which Henkin said is significant given that the surrounding ZIP code has the highest infection rate in the city.

“I think it does speak volumes to the fact that people are taking it very seriously when they’re here, students and staff alike,” she said.

Inside the classrooms, students sit spaced apart, wearing masks, with clear plastic shields surrounding their desks. At least three air purifiers run constantly in each room. This is still virtual school. The kids are logged into their individual online classes, with their teachers working remotely.

Jenelle Anderson is a proctor in the kindergarten room, tasked with keeping the wiggly 5- and 6-year-olds on track. It’s a far cry from her regular job as a high school hall monitor — “the total opposite of what I’m used to,” she said.

At that moment, one student was doing a “feelings check-in” on her laptop, looking at pictures showing different emotions. Another had brought his Easter basket for virtual show and tell. Then Anderson led a group of girls out to the hallway to use the bathroom one at a time.

“It’s just hard to keep them focused and doing their work,” she said. “They need a lot more than the older ones.”

“Sometimes the links won’t work. Or sometimes they’ll work one day, then the next day they won’t. Laptops dying in the middle of the day,” she said. “Those are the challenges.”

Earlier this week, all of Baltimore’s Student Learning Centers had to send everyone home early when the internet went out.

Christian Muñoz Aguilar, 11, was learning about the recent election in his fifth-grade class.

Christian’s mom works as a janitor, and when school shut down in the spring, she still had to go to work. Christian had to help supervise his four siblings while trying to do his own schoolwork.

“It was fun, but kind of distracting because my sister would always come in the room and distract me,” he said. “I had to take care of my brothers and log them on.”

Here he can concentrate, and he’s made some friends from other schools. There’s lunch at big, round tables and after-school activities.

So far, only about 1,000 students are getting this taste of normal, out of more than 80,000 in the district. About 1,200 more are expected to start next week, though officials recently scaled back the reopening plan amid a surge of COVID infections in the city.

Administrators at John Ruhrah said if there is another shutdown, this time students will be better prepared to keep learning at home. Now many of them have the skills and the experience to log in.