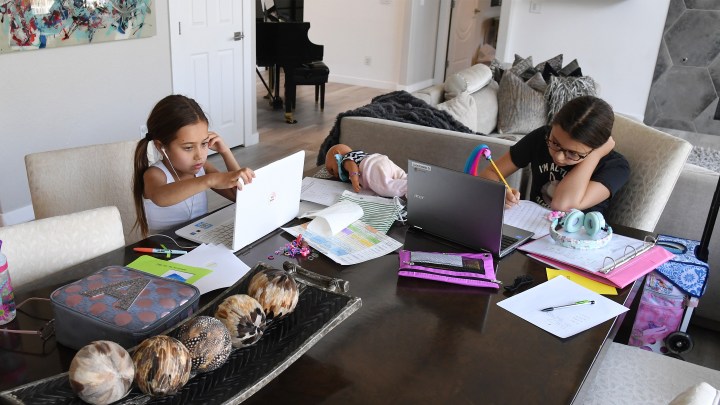 All summer, Patrick McCauley answered mental health hotline calls from his home. He finally traded out a workbench for a real desk, though he still sits on a camp chair — “a little makeshift, but it works,” he said.

McCauley is a social worker with the Los Angeles Unified School District. The district set up the hotline shortly after schools closed in the spring. As schools around the country are starting to open up — in person, with a hybrid model or remotely — it’s not just academics and COVID-19 that officials are worried about. They’re also worried about taking care of students’ mental health, and they still have to figure out how to pay for it.

McCauley is one of around 500 counselors for the district, which is the second-largest in the country with more than 600,000 students. He works with kids from elementary through high school. Since schools closed, he has fielded a variety of calls.

He said he spoke to one mother who called while her elementary-school-age daughter was having a meltdown.

Students, parents and others can call the hotline for advice about how to handle an immediate situation or for referrals to therapists. Classes in LA are online this fall, and the district plans to keep the hotline up and running.

Other districts have taken different approaches. In Harrisonburg, Virginia, they set up a virtual relaxation room, where students can watch videos and find tips for dealing with mental health.

School will be remote again when it opens, and school counselors will be available to sit in on virtual classes.

“Teachers can refer to, say, ‘I’d like a behavioral specialist. I’m having a challenge with this particular student each time we’re on synchronous learning,’ ” said April Howard, who oversees mental health in the district. “And the behavioral specialist can be a part of that to give suggestions.”

Administrators in Minneapolis know that many students depend on schools for mental health care, so they made plans to open school buildings for appointments with counselors, with appropriate COVID-19 precautions.  Rochelle Cox, an associate superintendent, said officials are planning to work with community partners who provide mental health care in the schools “and starting to invite them back [to school buildings] to provide some by-appointment, one-on-one services for students.”

She said the district is also looking at reallocating part of the school budget to hire more mental health professionals this year. It already works with more than 300 of them to serve more than 35,000 students.

A lot of districts can’t do that, though, especially as budgets are likely to be cut in response to the COVID-19 economic crisis. That leaves teachers responsible for their students’ mental health, said Sharon Hoover, who co-directs the National Center for School Mental Health at the University of Maryland.

“Unfortunately, school mental health is chronically underfunded and understaffed,” she said. “So a lot does fall on the shoulders of our educators when we don’t have the proper student instructional support personnel in place.”

She said it’s absolutely critical that kids’ mental health gets taken care of now. She points to studies of past disasters, like Hurricane Katrina, which showed that ignoring the trauma had negative effects on academic performance for years after the incident.