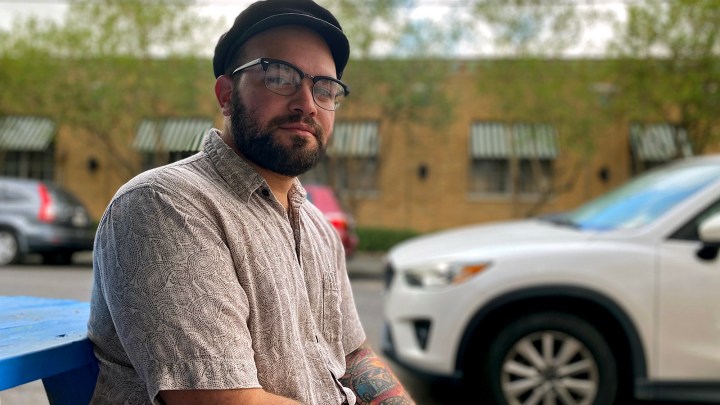 COPY
Matthew Seltzer sits on a bench in New Orleans, Louisiana in November 2021. Like thousands of others during the pandemic, Seltzer sought help from a mental health hotline when he was unable to find an in-person counselor. Shalina Chatlani/Gulf States Newsroom

Matthew Seltzer sits on a bench in New Orleans, Louisiana in November 2021. Like thousands of others during the pandemic, Seltzer sought help from a mental health hotline when he was unable to find an in-person counselor. Shalina Chatlani/Gulf States Newsroom
Listen Now

When the COVID-19 pandemic hit, one way New Orleans documentary photographer Matthew Seltzer found relief was behind the lens of his camera.

“I feel like those photos really spoke to me because for those brief seconds, life felt normal. But you could tell everybody was still struggling and the weight of the pandemic was heavy,” Seltzer said.

He had lost his day job as a countertop manufacturer. His grandfather passed away in January 2021, but he wasn’t able to attend his funeral because COVID-19 cases were surging.

To cope with these feelings, Seltzer tried to find a mental health counselor. But he was confronted, he said, with long waitlists.

With the pandemic, there are not enough counselors to meet the demand for therapy in many places right now. So as people look for ways to cope with the stress of the COVID-19 pandemic, many are turning to hotlines and alternative resources.

That’s what Seltzer did: He eventually found the help he needed online, with YouTube videos and mental health hotlines.

While calls to hotlines have been on the rise over the last five years, they skyrocketed during the pandemic. One national hotline — from the Substance Abuse and Mental Health Administration — saw an increase of 23% in average monthly calls between 2020 and 2021.

Sherrard Crespo is a clinical supervisor at VIA LINK, a nonprofit in New Orleans, which runs a number of phone, text and email hotlines.

“It’s a lot higher volume of intensity to the phone calls,” Crespo said.

She said the hotline received a high volume of calls not only looking for emotional relief but also seeking help with housing, food and safety.

“There’s loss of income, loss of family. The need is so intense and everybody is just feeling such panic,” Crespo said, adding that some people have hit their breaking point with the pandemic. “They were like, ‘I’m not going to be stoic anymore. I’m freaking out.’”

New Orleans public television station WLAE-TV launched a weekly show last year called “Coping During the COVID Crisis.” Roy Salgado, a professor of counseling and behavioral sciences at the University of Holy Cross who also offers counseling to students, co-hosts the show. He said the goal has been to provide a resource for a range of emotional issues people are having during the pandemic — from anxiety to concerns over socializing again.

“This show offers people an opportunity to acquire coping skills that perhaps goes out to more people instead of touching one individual, one couple or one family at a time,” Salgado said.

The show was initially set to be a limited series but has now transformed into multiple seasons.

And Salgado said he believes the resources we’re developing now will stick around.