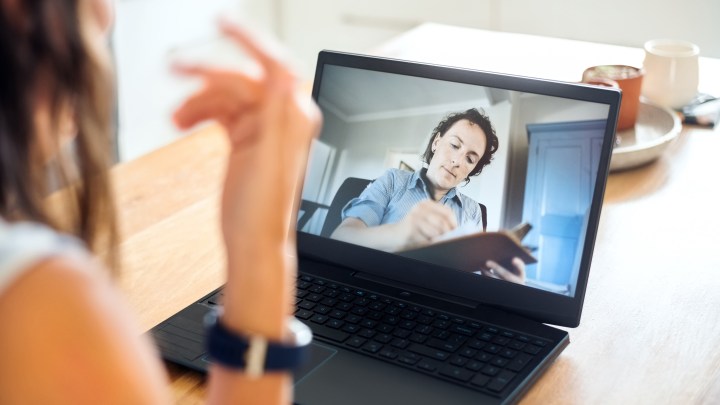 This story is part of a partnership with American Public Media’s “Call to Mind: Spotlight on Virtual Mental Health Care.”

The grief and stress of the COVID-19 pandemic have led to a spike in demand for mental health care. But amid a nationwide shortage of providers, more people are turning to remote — or virtual — care.

Many providers have been using virtual tools for decades, according to Dr. Jay Shore, a psychiatry professor at the University of Colorado who chairs the American Psychiatric Association’s Committee on Telepsychiatry.

“I’ve had patients I’ve treated for 20 years that I’ve never met in person and feel like we have good relationships — wonderful relationships, that would be the same in person,” he said.

But he said many of his colleagues were slow to adopt things like video or phone sessions, preferring to stick to in-person services. Then, the pandemic and its lockdowns began.

Now, “I can’t think of an organization or a provider over the past year that wasn’t involved in some offering of videoconferencing care,” Shore said.

According to a recent survey from the APA, 64% of psychiatrists didn’t use any kind of “telehealth” prior to the pandemic. As of January, however, “81% of respondents indicated that they continue to see between 75–100% of patients via telehealth.”

The trend is likely to last. Meanwhile, patients are flocking to services like BetterHelp and Talkspace, which connect people with therapists for phone, text or video sessions.

“If I had to guess, I’d say that going forward post-COVID, we’ll find that somewhere between 20% and 50% of all mental health consultations will be done either using video or audio,” said Dr. Peter Yellowlees, chief wellness officer and professor of psychiatry at the University of California, Davis, Health.

In Yellowlees’ practice, he said, he encourages patients not just to consider virtual sessions but also mental health care apps that don’t involve a live therapist. He sometimes prescribes apps almost the same way he might medication, he added.

“I literally talk to the patients about this being a therapist in your pocket,” he said. “And if you get anxious, or you have a panic attack, or you can’t get to sleep … get the app out and just relax away and go to sleep.”

Investment in mental health startups and apps topped $1 billion last year, according to financial data firm PitchBook — more than four times what the industry saw in 2015. But investment is also flowing into a new type of virtual mental health care: digital therapeutics, or software and apps using prompts or exercises to address common mental health concerns, like anxiety or depression, without the aid of a live therapist.

Juliette McClendon is director of medical affairs for Big Health, a digital therapeutics company that developed the apps Sleepio and Daylight. She said taking the human therapist out of the process can, in some cases, make therapy more accessible.

“If done intentionally, [these apps] can take out that element of sort of experiencing discrimination or microaggressions, as you may in in-person therapy or in virtual care,” she said. “And that’s something that can be potentially very appealing, especially to communities that have been traditionally left out of traditional mental health care.”

Providing care this way is significantly cheaper than an in-person or even virtual visit with a licensed mental health care provider. But, there’s only so much software can do.

“These apps are not meant to be replacements for therapists,” said Stephen Schueller, who teaches psychological science and informatics at the University of California, Irvine. He also runs the website One Mind PsyberGuide, which tracks and evaluates mental health apps.

Apps “might be good resources, as you’re trying to figure out what therapy might be like and what types of benefits you might be able to gain or if you’re searching for a therapist,” he said. “But I still encourage [people] to get connected to a therapist because I think that it’s the combination of technology plus human that gets the best benefits for folks.”

Schueller also cautioned that while there are many research-based apps, of the 10,000 to 20,000 mental health apps on the market, the vast majority aren’t backed by research.