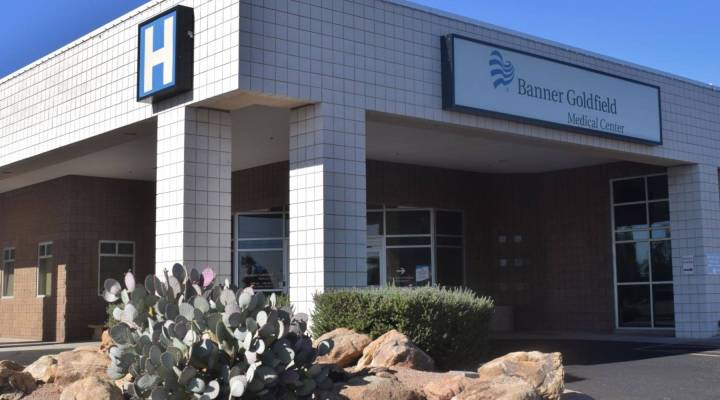 Jill Murdoch is coloring at her kitchen table in Mesa, Arizona, while her kids play video games after school.

“I’ve chosen a lot of bright colors that help me feel vibrant,” Murdoch said. “I can relax while I’m coloring.”

Murdoch was in a terrible bicycle accident about two years ago. She suffered a brain injury that’s left her battling bouts of anxiety. Sometimes it gets so bad she has to go to the emergency room to get help. But she often ends up waiting anywhere from 24 to 72 hours in the ER. She says it’s a tedious, stressful process waiting for the hospital to find a treatment center.

“You come to the point where you just either sleep, or you eat, or you just watch them watching you,” Murdoch said.

Arizona has one of the worst shortages of beds and providers in the country, but the problem is nationwide. There’s been a nationwide trend in the last decade of states closing psychiatric hospitals, and community-based health alternatives haven’t always picked up the slack. That means the mentally ill are increasingly turning to emergency rooms for treatment. Hospital waits and costs are skyrocketing. Now some providers are making investments into in-patient mental health care.

Banner Health, one of the main health care providers in the state, estimates 16,000 mental health patients show up at its ERs every year.

Arizona has one of the largest shortages of beds for behavioral health care in the country. Here in rural Apache Junction, like many place across the country, ERs don’t have the resources to keep a psychiatrist on the premises to diagnose mental health patients.

Dr. Robert Porter is the ER director at Banner Goldfield hospital in rural Apache Junction, east of Phoenix. He said many mental health patients come to his facility for care.

“Some of them are suicidal, some people actually have schizophrenia or psychotic episodes where they just can’t take care of themselves, or they’re doing something that is off the wall,” Porter said. Mental health patients often fill his eight emergency beds.

In response to the shortage of treatment options, Banner is building a new behavioral health hospital, expanding its campus in Scottsdale. The $36 million facility will have 96 private, in-patient beds.

Each year roughly 44 million people nationwide experience a mental health disorder. Dr. Renee Hsia with the American College of Emergency Physicians said many of them are uninsured or on Medicaid.

“Because Medicaid tends to be a low payer, they have low reimbursement rates, a lot of psychiatrists may not even want to accept them, and so it’s hard to get these patients placement,” Hsia said.

That’s where the new hospital comes in. Dr. Gagandeep Singh is the chief medical officer of the new facility. He said after treatment, most patients can transition to outpatient services.

“These are people that are our family members and our friends, who happen to be in a crisis,” Singh said. He said they just need a place where they can feel safe and get well.