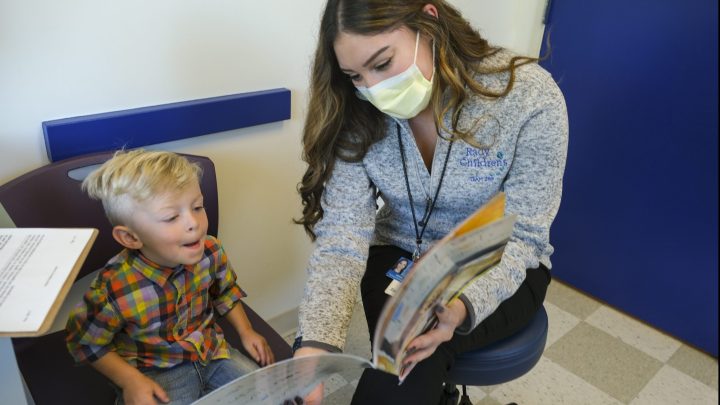 COPY
Developmental specialist Bella Lopez reads with 2-year-old Oliver Humphrey. She said the kids are often excited to see her at the doctor's office, in part because she's not the one giving shots. Mariana Dale

Developmental specialist Bella Lopez reads with 2-year-old Oliver Humphrey. She said the kids are often excited to see her at the doctor's office, in part because she's not the one giving shots. Mariana Dale
Listen Now

Families with small children in California often struggle to access preventive care — things like behavioral and developmental screenings and vaccines — that could help them be healthier and happier in the long run.

The state’s Medicaid program, called Medi-Cal, will be one of the first in the country to cover preventive services that treat kids and their parents together.

The new benefit, which takes effect in July, is designed to cover the cost of someone like a community health worker, who could connect families to resources like food banks, legal aid, parenting classes or therapy before they leave the doctor’s office.

“The social and emotional development that [children] go through in those first several months really literally transforms the architecture of their brain for their lives,” said Dr. Gina Johnson, the pediatric medical director for a group of Los Angeles County health centers.

“If we can intervene in a way to support patients and families at this earliest time in their life, we can actually make a difference.”

When Michelle Humphrey became a mom, her relationship with Google changed.

Searches for recipes turned into “Is it normal for my kid’s butt to be this color?” and “My kid has a bubble on his gums, what does that mean?”

“There’s just so many things that nobody knows as a parent until you are in the middle of it,” Humphrey said.

But there were challenges she couldn’t solve online.

After her younger son was born and the family downsized into a smaller home in the Southern California suburb of Temecula, her older son’s behavior changed. Boden went from being almost fully potty trained to having accidents and bouts of aggression that included hitting and biting.

“I think he just had a compound of like, multiple big changes in his life,” Humphrey said. They weren’t all bad, but it was just things that, like, his little, tiny, 3-year-old brain couldn’t handle.”

She brought her questions to her next pediatrician’s appointment at Children’s Primary Care Medical Group — not to the doctor, but to developmental specialist Bella Lopez.

“A lot of the time, providers don’t have the time to address other areas like, you know, mental health development, the family system as a whole,” Lopez said. “That’s really kind of where I come into play.”

The early childhood nonprofit Zero to Three manages 200 HealthySteps sites nationwide. Research shows that participating kids receive more preventive and developmental services and are more likely to get vaccines on schedule, among other benefits.

Lopez initially connected Humphrey to a parenting class and a clinic that took Medi-Cal and offered therapy for parents and young kids. Humphrey said it’s improved the relationship between her sons and helped Boden get back on track developmentally.

It “made me feel like I have an ally, a liaison to help me find answers that I can’t find myself,” Humphrey said.

Once her sons are older, Humphrey said, she might become a doula, who assists with childbirth, or a lactation consultant, jobs in which she could pass on what she’s learned to other parents.

A question of funding

The Temecula HealthySteps program is funded by a local government agency, but sustainability has been a struggle for similar programs in other places.

“To have this family specialist, whose whole purpose was to assess the needs that the family was experiencing and to connect them with the resources that they needed … philosophically, it’s a no-brainer,” Johnson said. “That’s what should be done, always.”

Despite the program’s popularity, Northeast Valley wasn’t able to sustain it after grant funding ran out in 2020. Part of the reason is that providers often can’t bill for the services the specialists or health workers provide to families.

“That’s key, because you need to be able to bill in order to support staffing to provide these types of services,” said Kate Margolis, a pediatric psychologist who directs the division of integrated behavioral health at San Francisco General Hospital. She led a team that pushed California to create the new Medicaid benefit covering more preventive services.

It’s an approach that can save the health care system money, but only if clinics can afford to offer it in the first place.

“By providing those supports based on just the presence of risk, we really can get ahead of problems before they get worse,” Margolis said.