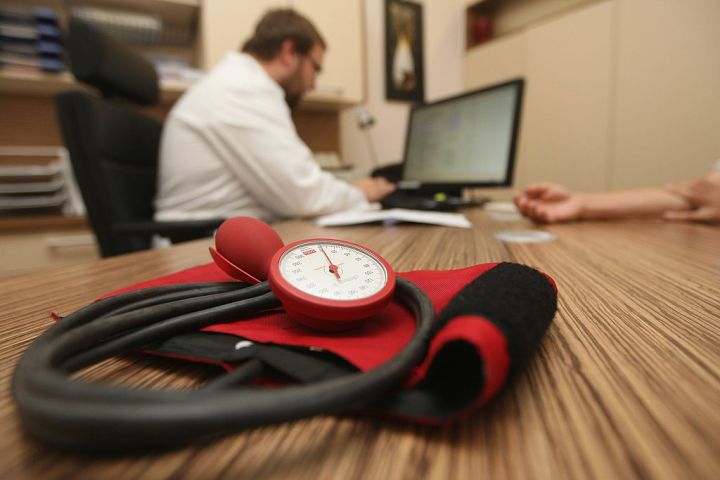 About four years ago, Mae Gaines noticed her menstrual periods were off. They were heavy, and lasting sometimes for two or three weeks instead of a couple of days.

Gaines was a massage therapist in Boise, Idaho, but couldn’t make it through one massage appointment without needing to change a tampon.

“It was just terrible,” Gaines said. “It got so bad that I couldn’t stand up at the table for an hour because I was gushing blood so much.”

She quit her job and, unable to keep paying for private insurance, went on Medicaid, the state-federal program that provides health coverage to very low-income people.

Gaines thought the extreme periods were connected to a painful heaviness in her abdomen. But when she would go to doctors, she felt they didn’t listen.

“They would say, ‘You’re in such great shape. There’s nothing wrong with you,’” Gaines said. “And I’m like, ‘I am in pain!’ They would ignore me. … It made me feel uncomfortable as a Black lady.”

Disparity in how Medicaid works

Studies show Black people and other minorities in the U.S. are subject to a number of inequities in health care. In the United States, if you’re Black, Hispanic or Indigenous person, you’re less likely to receive health care from a specialist physician. That’s according to a recent study that looked at racial and ethnic disparities in outpatient specialty care. The findings contrast visits with primary care physicians, which were more equitable across racial and ethnic groups. The disparity has a lot to do with how Medicaid works, but there’s more to it than that.

Despite exercising five days a week and eating a vegan diet, Mae Gaines gained weight — 60 pounds in under four months. She could tell something was wrong in her abdomen. Finally, she got an ultrasound that revealed tumors all over her uterus and was immediately referred to a specialist.

“Then I had to wait three, four months to get the appointment,” Gaines said.

That was three or four months waiting to see a specialist, not yet knowing whether the tumors were cancerous or benign.

One reason it may have taken so long to get seen is because of the type of health insurance she has.

“Access to specialist care is an additional barrier when you’re on Medicaid insurance,” said Andrea Christopher, internal medicine physician at the Boise VA Medical Center and a medical educator through the University of Washington School of Medicine. That’s in part because Medicaid often reimburses doctors at lower rates than private insurance, Christopher said.

“Certain clinics may have a limit on the number or percentage of patients with Medicaid insurance that their clinic can take,” Christopher said.

Because Black, Hispanic and other people of color are disproportionately on Medicaid, they are worse off when specialists limit Medicaid patients.

Dr. Stephanie Woolhandler, distinguished professor of urban public health at the City University of New York’s Hunter College, co-authored the recent study that looks at who gets appointments with medical and surgical specialists. The researchers analyzed three years of data from patients who were seen by specialists nationwide.

“And we found that for most of the specialties, the specialists were seeing white patients much more than Black patients and other minority patients,” Woolhandler said.

One reason is that fewer specialists have clinics in communities of color.

But the reasons go beyond access. It’s important to acknowledge disparities created by Medicaid, but it’s too easy to blame systemic racism on how Medicaid is set up, said Dr. Sylvia Gates Carlisle, the director of practice, management and curriculum at the University of California, Riverside, Family Medicine Residency Program. “Because then it’s not race, it’s money,” Gates Carlisle said.

She points to national data: Black patients are less likely to get necessary pain medication and are more likely to receive drastic interventions like cesarean sections.

Gates Carlisle tells the medical residents she teaches that if they care about eliminating racism in health care, they should track how they personally diagnose and treat patients.

“Assume, until you can prove otherwise, that you’re no better than the system,” Gates Carlisle said.

Back in Boise, after Mae Gaines finally got in with specialists, she learned her uterus was full of benign fibroid tumors.

“The fibroids in my stomach was so large, it was equivalent to a six-and-a-half-month pregnancy,” Gaines said.

At that point, she received great health care from doctors she trusted. At 49, she was scheduled for a hysterectomy to remove the fibroids. She was nervous.

“I have a goal to live longer than my mother,” she told her surgeon. “And my mother died at 49.”

But the surgery went well, and a few weeks ago, Gaines made it to 50. She celebrated her birthday, meditating and thinking about her mom.