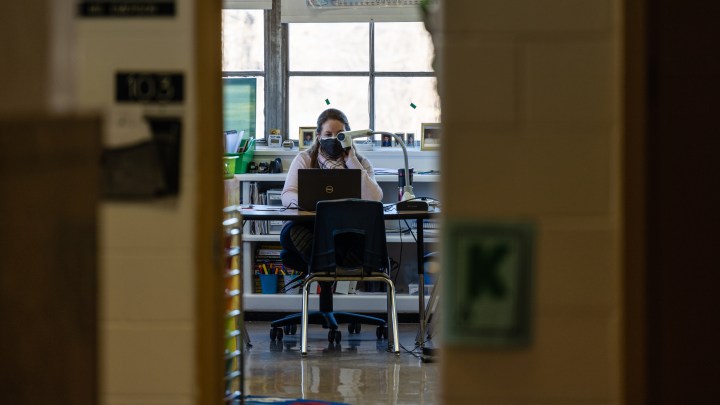 When Caroline Kuhlman O’Neill started teaching virtually during the pandemic, she needed to keep the attention of a bunch of Baltimore eighth graders. So, she dressed in character sometimes. She showed up as characters from “The Hunger Games” for lessons on rebellion, colonization and different forms of government. The students noticed.

“They were happy to come off of mute and share what they thought with any of the costumes,” said Kuhlman O’Neill. “Sometimes I was called ‘cringe,’ and sometimes I was told to ‘slay, queen.’”

Prior to the pandemic, virtual education was kind of a niche product. It’s existed for decades, but it wasn’t an option that many public schools in the U.S. provided. During the pandemic, school districts had to offer it. And some of their students — or, to put them in Marketplace parlance, their “customers” — got a taste for it, which means public schools have had to rethink how to keep those customers happy.

In Kuhlman O’Neill’s case, as a teacher at Charm City Virtual — a new school offered by Baltimore City’s public school district — she said she knew she didn’t have a captive audience like she did in the classroom.

“I kind of felt like it was my responsibility to conduct as much of a three-ring circus as I was able to to make sure that I was holding my students’ attention,” she said.

Kuhlman O’Neill said there were lots of reasons that students wanted to enroll. “I had kids in my class who were cancer survivors. I also had the largest population of LGBTQ+ students that I’ve ever taught, who were essentially feeling more happy and safe being online.”

In addition to giving students the chance to try out virtual learning, the pandemic also provided the opportunity to develop the product of virtual learning. It used to be less dynamic, with students and teachers accessing materials at different times.

“Pre-pandemic, online learning was heavily asynchronous, meaning that there was relatively little time that students were live with a teacher and with other students,” said John Watson with the Evergreen Education Group.

“There’ll be a lot of real-time video to have things like small group sessions,” Watson said. “Even social things like yoga or just book discussions or things like that. Again, quite different than a teacher lecturing.”

Watson estimates there are about 2 million students in the U.S. currently learning full-time online, which is way more than there were prior to the pandemic.

But a virtual classroom is a product that requires a lot of resources. That means that in order to see those “Hunger Games” characters, students need to have a good internet connection, good devices and sometimes tech support.