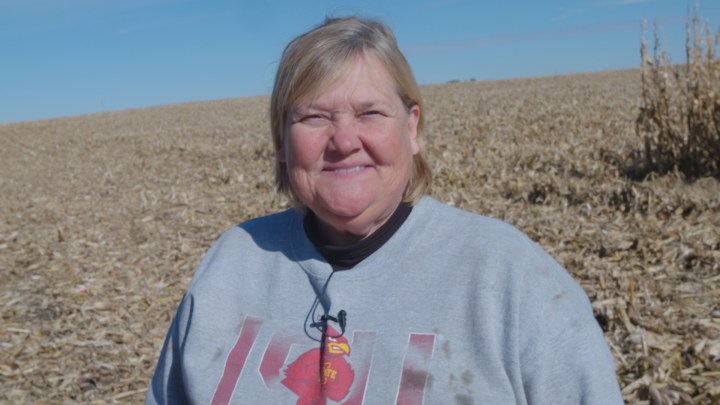 COPY
"The thing I decided a long time ago, because I'm headed into my 38th year of farming, is I cannot fret about the things I can't control," said April Hemmes. Ben Hethcoat/Marketplace

"The thing I decided a long time ago, because I'm headed into my 38th year of farming, is I cannot fret about the things I can't control," said April Hemmes. Ben Hethcoat/Marketplace
Listen Now

President Donald Trump’s administration has levied tariffs on billions of dollars’ worth of Chinese goods, and experts predict trade tensions with China will continue under the Biden administration. Over the past few years, the trade war has meant uncertainty for farmers like April Hemmes, who grows corn and soybeans in Hampton, Iowa.

“Marketplace” host Kai Ryssdal checked in with Hemmes about how things are going and what she hopes agriculture policy will look like under a new president. The following is an edited transcript of their conversation.

Kai Ryssdal: So first of all, the question is, how was the harvest? Right? That’s all done now?

April Hemmes: Yes. And you know, when I last talked to you, I was all gloom and doom, but I’m happy and smiles now. Corn came out far better than I thought it would, beans were average to a little bit below, but hey, for a drought, we’re looking good. So not too bad. And the markets have come up.

Ryssdal: Well, I was just gonna ask, how’s the pricing for you?

Hemmes: The pricing has been great. Actually, today a crop report came out, and they lowered everything, which means there’s less crops out there for China to buy. So I think beans were up 30 cents and corn was up 15. So looking a little bit better for agriculture.

Ryssdal: Well, speaking of beans for China to buy, I should know this off the top of my head, but I don’t. Where do we stand with the phase one China deal and then promising to buy all this stuff? Are you seeing any of that coming through to you?

Hemmes: Actually, yeah. What I’ve heard is that they’re 71% or around there, bought or promised to buy soybeans. So that’s the kicker in this whole thing. What they’ve done is pretty much bought out all the soybeans from Brazil. So now we’ve even seen Brazil importing soybeans from the U.S., which I think they said hasn’t happened in like 20 years. So that’s the whole thing is the world needs soybeans. And now we’re the game in town to go to, so it’s really helping our prices.

Ryssdal: That’s nice. That’s a change from, you know, when you and I talked when I was out there last year. It was a whole different ballgame.

Hemmes: Yep, you bet it is. So China’s coming back online. They’re recovering after African swine fever. They built up a poultry herd, which they really didn’t have. So, you know, we’re really looking at increased need [for soybeans as feed] from China down the road.

Ryssdal: All right, well let me not ask you to get political, but this is the season and there’s going to be a change in trade policy. What are you expecting, thinking, hoping?

Hemmes: Well, you know, the big question for those of us in ag is how quickly President-elect Biden will undo policies that President Trump has done. President Trump has been rather kind to farmers and agriculture in loosening up some of the regulations we’ve had. So we’ll look —

Ryssal: We should also say April, he’s made billions of dollars in payments to farmers, too.

Hemmes: Exactly. Which, you know, we weren’t looking for. We’re not standing there with a handout, but with the prices as low as they were, were very welcome. So we don’t see, you know, I personally don’t see that coming in the next year, just because the prices have come up. Also, with the Biden administration, probably conservation is gonna play a huge part, which, you know, a lot of Americans don’t realize farmers are doing a lot of that right now. And we sure hope biofuels play a part in that because that’s a big part of the economics of rural America is ethanol and biodiesel.

Ryssdal: Yeah. What’s the chatter? What’s the lunchtime conversation in that place you and I went for lunch that day?

Hemmes: Oh, yeah. Bradford, the Stumble Inn. Don’t you love small town America? We’re just, you know, it’s kind of wait and see. And like I said, agriculture around here really, really focuses on livestock and the biofuels. So what comes next there.