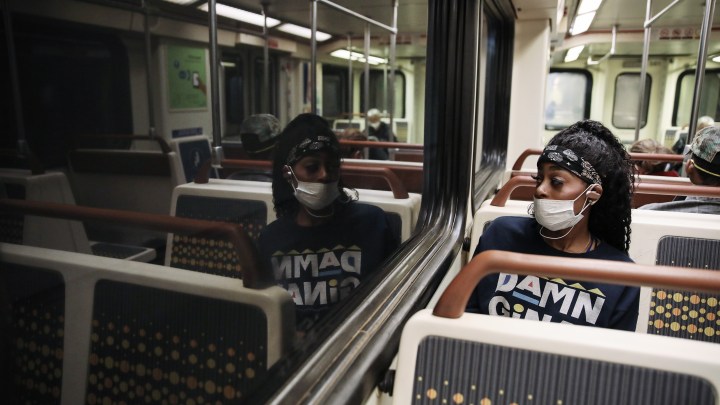 COPY
A woman rides a Metro Rail train in April in Los Angeles. The pandemic has led to a plummet in public transit ridership. Mario Tama/Getty Images
Elections 2020

A woman rides a Metro Rail train in April in Los Angeles. The pandemic has led to a plummet in public transit ridership. Mario Tama/Getty Images
Listen Now

The 2020 election was a good one for public transit, even as the pandemic continues to drive down ridership, fares and tax revenues that support the systems. More than a dozen local transit measures passed around the country, gaining approval at an historic rate.

“I was really worried,” she said. “I was like, ‘How am I gonna get places?’ I don’t have the option of just taking a car.”

The tax increase cleared the two-thirds approval needed to pass.

In Austin, Texas, business consultant Nathan Ryan is celebrating the passage of a property tax hike to fund a $7 billion expansion of bus and rail.

“I think it will mean that Austinites will actually get to experience the city a little bit more and have a little more fun getting around,” he said. He’s looking forward to using the expanded rail system for nights out once the pandemic ends.

Voters from Arkansas to Montana approved at least 15 transit-related measures worth about $38 billion. Most are funded by tax increases during a recession and a pandemic that has called into question the very future of cities and the physical workplaces that have defined them.

Paul Skoutelas, the head of the American Public Transportation Association, said the 92% approval rate of transit measures in 2020 represents an historic high.

“What has prevailed is a look to the future,” he said. “Public transit is really at the nexus of many of these challenging issues that we have as a society, from equity, from the environment, and really economic opportunity.”

But the pandemic has caused a transit crisis. Ridership has fallen by as much as 90% in some places, said Skoutelas, while local tax revenues have dwindled.

Early in the pandemic, the federal CARES Act gave transit agencies $25 billion in emergency aid, but Skoutelas said they’ll need another $32 billion, with no new relief in sight.

The limits of federal support make local funding for transit all the more important, said Yonah Freemark, a fellow at the Urban Institute.

“The reality is that the federal government funds just a portion of overall costs of the construction of new transit lines and pays almost nothing when it comes to the operations of transit lines,” he said.

As liberal voters have increasingly concentrated in cities, localities have become more willing to tax themselves to fund transit.

Whether those same voters will actually use the service is another matter. In Los Angeles, where the two largest voter-approved transit measures in history have been approved, transit ridership was trending down for years before the pandemic.