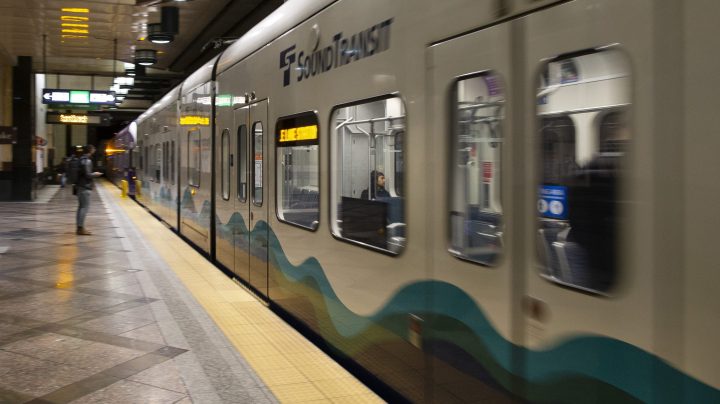 COPY
In Seattle, bus ridership is down, but Link light rail is nearly back to pre-pandemic passenger levels. Karen Ducey/Getty Images

In Seattle, bus ridership is down, but Link light rail is nearly back to pre-pandemic passenger levels. Karen Ducey/Getty Images
Listen Now

Two and half years into the pandemic, public transit ridership is still down about 40% from pre-COVID levels nationally.

But it’s important to remember that fewer and fewer Americans were getting on transit even before the pandemic hit. By 2019, bus ridership had fallen to levels not seen since the mid-1970s.

One of the few places that bucked that trend was the Seattle metro area. While the Emerald City’s population grew more than 20% over the last decade, the share of commuters who drove alone to work shrank by almost 10%. Seattle and its surrounding suburbs became a poster child for getting transit right by investing in expanded bus service and extending light rail.

At about 4 p.m. on a Tuesday in downtown Seattle, Sherwin Lee stands at a bus stop on 2nd Avenue, just a few blocks uphill from a glimmering Puget Sound.

Lee is waiting for the 550 Sound Transit express bus to take him home to Bellevue, an affluent suburb about 15 miles east of the city where many tech workers like Lee live. He’s a data scientist for a software company.

The 550 arrives, and Lee pretty easily finds a seat. It’s something he’s still getting used to.

“This route actually was very regularly what we would call crush loaded, just packed to the gills, before the pandemic,” Lee says.

Now the bus is maybe 80% full. Not bad, but not the numbers transit enthusiasts like Lee would like to see. He moonlights as a writer for a local transit blog.

“I’m not going to complain about getting a seat, although of course transit works best and is more efficient when it’s packed,” Lee says.

It’s officially “back to office” week at the company Lee works for, where workers who plan to spend most of their time at the downtown headquarters can claim the desk they want. Lee estimates that maybe a quarter of his co-workers were there today, and the lure of remote work is what made his seat available on the 550.

Lee is part of a group known among the transit literati as “choice” riders. He could afford to drive into work, but he prefers the bus.

“They are choosing whether they’re going to drive down the I-5 [freeway] in the awful rush hour congestion and pay 30 bucks a day or $300 a month for parking in downtown Seattle,” said Mark Hallenbeck, who researches transit at the University of Washington.

Hallenbeck said Seattle was a transit success story last decade because it made that choice easy for commuters. The city and surrounding region prioritized dense housing around expanded light rail and bus services.

But now, choice riders like Lee have another, well, choice: videoconferencing via Zoom.

In February 2020, 1.3 million people took the type of express commuter bus Lee uses. That number is down by half. Ridership on nonexpress lines is also way down.

Weirdly, though, it’s not as if car traffic has eased much in the era of remote office work. Because of the basic human need to leave the house after a day of nonstop Zooming, Hallenbeck said afternoon rush hour is actually worse.

Ceci Hooks luckily misses most of that traffic on her bus commute into the city. She works the graveyard shift. But it’s still a schlep.

“It’s like an hour, hour and five minutes, depending on traffic,” Hooks said.

Hooks lives in Lakewood, a far-flung suburb about 40 miles south of downtown Seattle. She works as a dispatcher for the bus service and makes about $24 an hour.

Ridership in the region’s lower-income suburbs remains pretty strong, a pattern that’s true in most of the country.

For those, like Hooks, who can’t telecommute, the bus is a more affordable option than driving. And Hooks actually loves her commute. It’s more peaceful than getting behind the wheel.

“I don’t want a lot of mileage on my car,” she said. “And I have road rage sometimes.”

Local bus systems are adjusting to shifting commuter patterns. Express commuter routes from richer suburbs have been trimmed, and transit managers are trying not to touch routes in lower-income areas.

But there’s another mode of transit that’s recovering much quicker than the bus.

On a Thursday afternoon, Yahir Cantero and his partner, Lissa Clear, are taking Link light rail to Lumen Field, where the Seahawks are about to host their first preseason home game. The car is packed with football fans.

“This is the first time we’re using it,” said Cantero. “We decided to try it out, and it is way more affordable than parking at the stadium.”

Ridership on Link is nearly back to pre-pandemic levels.

That’s mostly thanks to riders like Cantero hitting up sporting events or restaurants or running errands throughout the day. There are fewer commuters, but more all-day travel.

It’s what gives local transit enthusiasts hope that the region can still be a model for transportation success. There are plans to triple the mileage Link covers in the coming years.

Crucially, Seattle-area transit agencies actually may have the money to make good on those plans. Unlike systems in New York and the San Francisco Bay Area that are staring down big budget deficits, passenger fares make up a relatively small portion of Seattle’s bus and light rail revenue streams. Local taxes are the major funding source.