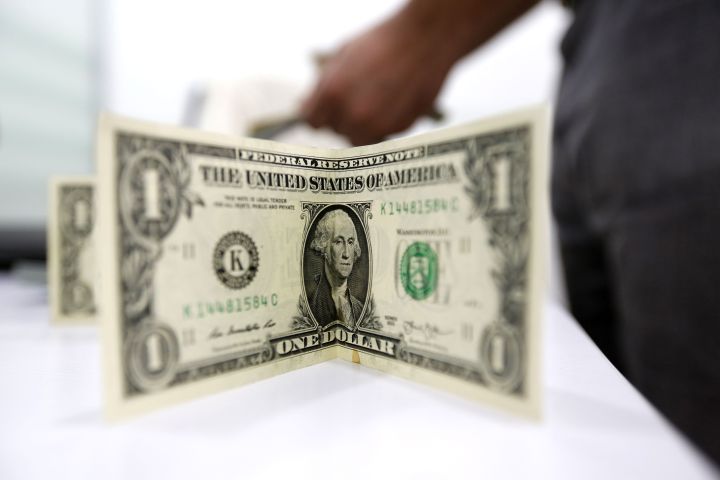 COPY
The dollar is not only the global reserve currency, it's a safe haven in times of uncertainty. ATTA KENARE / Contributor Getty Images

The dollar is not only the global reserve currency, it's a safe haven in times of uncertainty. ATTA KENARE / Contributor Getty Images
Listen Now

The value of the U.S. dollar is always fluctuating, but during this pandemic, it’s hit some highs and lows. Back in March, shortly after the World Health Organization declared the COVID-19 outbreak a pandemic, the dollar’s value, as tracked by the DXY index, crossed 100 for the first time in three years. (The DXY index measures the dollar’s strength against other currencies. The index goes up when the dollar gains strength.) And not too long after that high, the value of the dollar began to drop, reaching a two-year low by late July. And when the value of the dollar changes, that can influence how much things cost.

In addition to being the global reserve currency, the U.S. dollar, backed by the largest economy in the world, is also a safe haven currency in times of global turmoil and uncertainty.

Viral Acharya is a professor of economics at New York University Stern School of Business. He explained that “the pandemic created a huge wave of uncertainty, including in the minds of the central banks and the other investors of the world. And they all basically wanted to hold dollar assets. And as a result, the scramble for dollars became strong.”

And that strong scramble for dollars he mentioned comes down to trust. Investors and central bankers across the globe trust the U.S. government to pay its obligations, so in times of uncertainty, dollar assets are a safe bet.

As Susan Pozo, professor of economics at Western Michigan University explained, part of that trust is because of stability. The U.S, she said, is seen as “a stable place relative to the rest of the world. And when we speak about stable, it’s not just that the dollar is stable, but that the economy is stable.”

But that safe haven status, Acharya said, “while presently still intact, is being increasingly questioned.”

So it’s not like the U.S. dollar is suddenly going to be replaced as the global reserve currency, or that oil will be priced in the euro or the yen. But the dollar’s value is a window into how the world thinks the United States and its economy is doing.

So what can influence that perception? We threw that one to our panel of economists.

“We have lots of things to worry about: a raging pandemic, wildfires, hurricanes, a tense election,” said Tarek Hassan, an associate professor of economics at Boston University. “I’m more worried about the effects of erratic foreign policy.”

On the policy note, Pozo agreed, saying one thing she’s looking at is “what our policy has been in the last few years to get out of international courts, to break up the trade agreements that we have.”

Said Acharya: “In general, stability of the United States policy as a global bellwether and the way its position has been somewhat shaken over the last few years.”