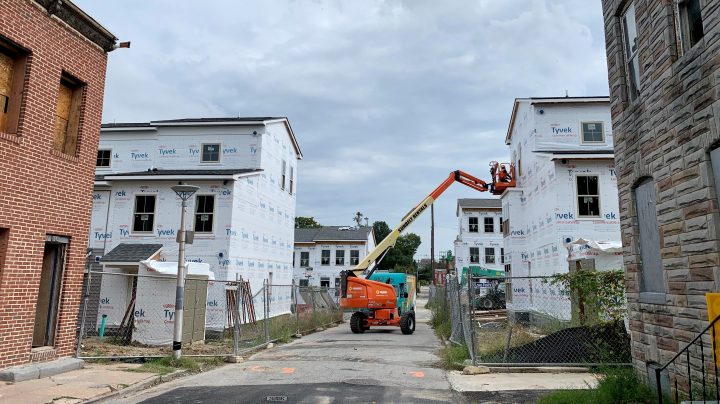 COPY
A new low-income rental development rises down the street from where Black Women Build - Baltimore is renovating houses for homeownership, Amy Scott/Marketplace
The Block

When Quanshay Henderson first moved into her small brick row house in Baltimore in March, the block was pretty deserted, with just a few occupied houses among the boarded-up vacants and overgrown empty lots.

Henderson, 28, was the first homeowner to participate in Black Women Build – Baltimore, a nonprofit group that buys abandoned houses, trains Black women to help renovate them and then sells the houses to the women at affordable prices.

And she said not having neighbors in those early days has been one of the biggest challenges — “not having people who understand what we’re trying to do, not being able to talk to people.”

But neighbors are on the way. Just a few doors down, three women are working on rehabbing the next cluster of houses they hope to buy through Black Women Build. And Henderson is happy for the company.

“As I’m seeing more work happening, I can feel the energy about to shift in the neighborhood,” she said. “I think it’s a good thing overall.”

But she’s also troubled, because at the end of the block, a massive housing development is under construction. Marshall Gardens is named for the late Supreme Court Justice Thurgood Marshall, who grew up nearby. When complete, it will span several blocks and include 87 town houses and apartments, mostly subsidized for lower-income renters. Many of those renters will be moved from an aging public housing project on the edge of a much more affluent — and white — neighborhood called Bolton Hill.

“That’s definitely a red flag to me,” Henderson said. “I have a sense of what that means — of why Marshall Gardens is being developed over here and not in Bolton Hill.”

“Over here” is Upton/Druid Heights, a predominately Black community, where the median income is $21,000.

About half the units in the new development will be set aside for very low-income renters using Section 8 vouchers, who spend about one-third of their income on rent. The rest will be mostly “workforce housing,” affordable to people earning somewhat more, with rents ranging from $799 to $1,085 per month. Only nine units will be market-rate rentals, charging between $1,100 and $1,600.

Henderson, who grew up in public housing in a segregated neighborhood, worries the development will further concentrate poverty in an already distressed area.

“I already know what happens when you force a group of people to live in an area that does not have opportunities to advance,” she said.

Research has shown that growing up in concentrated poverty can have disastrous health and social effects for children and make it harder for them to move out of poverty later in life.

Proponents of Marshall Gardens say it’s a big improvement over the old project, Pedestal Gardens, which eventually will be torn down and replaced with mixed-income housing.

Pedestal Gardens is “a garden-style fortress, where it really is disconnected from the neighborhood,” said Jacqueline Alexander, vice president of real estate development for The Community Builders, the nonprofit developer behind Marshall Gardens. “It looks like urban renewal housing for people with less means.”

In the new development, she said, there’s no way to tell which units are subsidized and which are market rate.

The red-brick town houses, with their big windows, “all look the same,” Alexander said. “You can’t even tell the difference from the street. That’s the whole point of it.” On the inside, “there’s no different finishes or amenities,” she said.

Looks aside, critics say it’s still rental housing, most of it subsidized, and many see Marshall Gardens as creating just another form of the segregation it’s designed to replace.

“We understand the need for low-income housing, but you need a healthy mix in order for people to have access to more opportunities,” said Kathleen Mitchell, who lives right across the street from one section of the development in a restored century-old row house.

Her family’s roots in West Baltimore go back five generations. Her great-grandmother, Lillie May Carroll Jackson, and grandparents, Clarence and Juanita Mitchell, were prominent civil rights activists. Kathleen Mitchell grew up a few miles from Druid Heights in a wealthy, mostly white neighborhood.

“Actually, when my parents bought the house in the ’70s, the covenant still had ‘no chickens, pigs, Jews and Negros,’” she said.

Now 49, Mitchell moved to Druid Heights three years ago to help revitalize the community. She’s on the board of Black Women Build, and she said Marshall Gardens is working against the greater goals of that revitalization. And this isn’t about not wanting low-income people in the neighborhood, Mitchell said.

“We’re all low-income here,” she said. “It’s not that. Give the opportunity for homeownership. That’s what we want.”

But building new housing — for sale or rent — is expensive, and in low-income neighborhoods like Upton/Druid Heights, developers say they can’t make enough money to cover the costs. So they rely on government subsidies. Marshall Gardens is being financed with Low-Income Housing Tax Credits, which are sold to investors and come with strings attached. As part of the deal, most of the units have to be set aside for lower-income renters for at least 40 years.

Future phases of the Pedastal Gardens redevelopment will have more of a mix of subsidized and market-rate rentals, along with opportunities for homeownership, on blocks where the market is stronger, Alexander said.

“You have to look at what are the rents that you’re able to achieve on this part of the neighborhood,” she said. “It’s always a balance in terms of the financing of what you can do.”

“Marshall Gardens is one piece of a large puzzle that is coming to place within the community,” said Alice Kennedy, Baltimore’s acting housing commissioner.

Just a few blocks away from Marshall Gardens is the state’s first Black Arts District, with tax credits and other incentives for investment. Thurgood Marshall’s once-segregated primary school is getting a $6 million makeover as a community resource center and museum. Dozens of historic row houses are being rehabbed and will go on the market.

“I think we’re going to see catalytic change and transformation that respects the culture and traditions of those neighborhoods,” Kennedy said.

That’s what Quanshay Henderson is looking to do on her block, and when they arrive in a few months, she plans to welcome her new neighbors from Marshall Gardens.

And create a community of homeowners and renters that can come together for change.