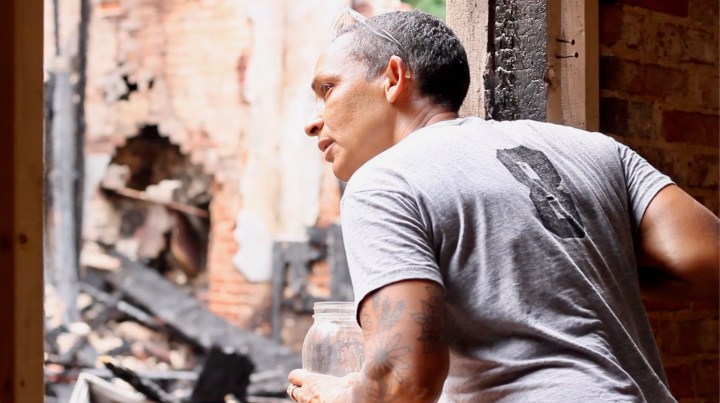 COPY
Shelley Halstead assesses the damage after a fire burned through a building she owns in Baltimore. Dena Fisher
The Block

Shelley Halstead assesses the damage after a fire burned through a building she owns in Baltimore. Dena Fisher
Listen Now

Back in July, Shelley Halstead took a break from her work rebuilding vacant houses in Baltimore and went to visit a close friend on a Caribbean island. She was eating dinner one night, just starting to unwind, when a neighbor called from back home.

“I thought, ‘That’s kind of late for her to call,’ so I declined the call,” Halstead said. “Then another neighbor called, and that’s when you have that sinking feeling that something isn’t OK.”

This time, she picked up. It was her friend Albert.

“Your building’s on fire,” he told her.

Her building. A three-story abandoned building she’d refinanced her mortgage to buy for $110,000 just a few months before. She planned to turn it into lofts and a gallery for Black artists. The building is in Upton, a historic but distressed neighborhood just blocks from Baltimore’s new Black Arts District.

Back home, a friend started filming the scene. In the video, you can see firefighters battling the flames as neighbors watch from the street.

“Then they kept texting photos and video of the building on fire, and I’m just sort of freaking out,” Halstead said.

She cut off her vacation, booking the first flight home she could find.

Inside the shell of a building, there was nothing but a pile of scorched beams on the floor, the remains of the fallen roof. While the brick walls still stood, anything made of wood — the window frames and flooring — was charred black.

“That’s where it started,” Halstead said, pointing to a corner. “That’s what the fire person said.”

This isn’t the only building Halstead is developing in Upton’s Marble Hill Historic District. She has plans for a cafe a block over. Halstead is also executive director of Black Women Build – Baltimore, a group that restores vacant and abandoned houses for affordable homeownership.

As a relative newcomer from Seattle, she’s faced some resentment from power brokers, who she said had their own designs on the building. A few days after the fire, Halstead was voted off the community association board.

“I have to believe that it was a squatter that set it on fire,” she said. “Because if not, then the alternative is to believe that somebody intentionally did this and is trying to really mess with me.”

She had another reason to be suspicious: There had been a huge rainstorm the day of the fire. The part of the building where the fire started had been exposed to the elements.

“A fire breaking out in the building that’s been sitting there for 20 years in a rainstorm, that’s a lot of wet wood,” said Andre Robinson, a community developer who’s worked in Baltimore and Washington, D.C. He used to live in Upton and had made an offer for the same building. Robinson said he’s seen this dynamic in distressed neighborhoods before.

“When you have a society that’s been sort of wrecked to a certain extent, fiefdoms will pop up in the midst of all that,” he said. “If you, the stranger, are coming in and talking anything different and aren’t falling in line with what they’re talking about, you kind of become a target.”

He added: “The bottom line is that she’ll still win because it didn’t burn it to the ground.”

It will cost her, though. The building had been too unstable to insure, and Halstead figured the fire set her back about $100,000. It also isn’t the only setback she’s faced. Earlier this year, several tools went missing from the houses she’s been rebuilding a few blocks away on Etting Street. Someone tipped her off that people were taking them around the corner to sell.

“So I got my shop vac back, but they took a table saw, a couple chop saws, drill motors,” she said. “We put in heated floors — they took the thermostats.”

All that slows things down. And it’s one reason Baltimore struggles to solve its vacancy crisis. The official count — more than 15,000 buildings with a vacancy notice — has stayed stubbornly high for the past decade. There are so many forces working against developers like Halstead — sometimes even their own neighbors.

After the fire, Halstead wondered why she was pouring her time and money into this work.

“I was sort of like, ‘Is it worth it?’” she said. “But then, as a builder who just sees the possibility in everything around here, just absolutely everything, I’m like, ‘Yeah, it’s worth it.”

So, she’ll keep going until it’s not.