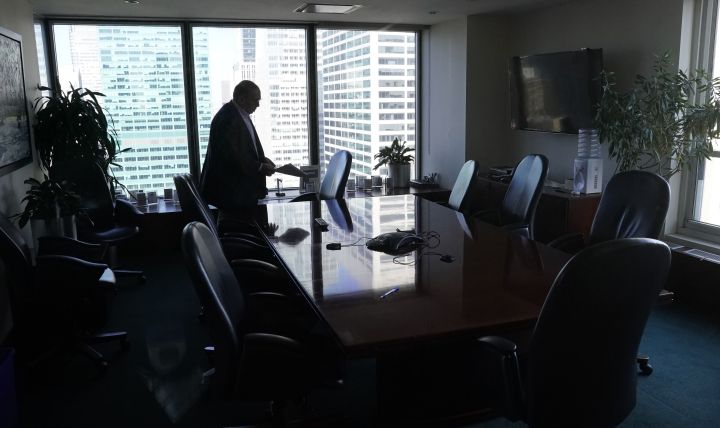 COPY
According to the latest Marketplace-Edison Research Poll, 30% of workers 55 and older aren’t confident at all about the prospect of finding a new job if they needed one. Timothy A. Clary/AFP via Getty Images
Economic Anxiety Index®

According to the latest Marketplace-Edison Research Poll, 30% of workers 55 and older aren’t confident at all about the prospect of finding a new job if they needed one. Timothy A. Clary/AFP via Getty Images
Listen Now

Tom Lynch is an upbeat guy. He’s 75, and still has his job as an accountant in North Carolina. He gets to work from home. But even though he’s been able to hold onto a job so far, he’s not optimistic about what would happen if he lost it. “Beginning when I was 55, I was having trouble getting interviews,” he said. “I think I could find work, but I’d probably be working at 70%, 80% of what I make today.”

More than 25 million Americans are receiving unemployment aid. And for many older workers, there is concern that if they join those ranks, they may not get another job at all.

According to the latest Marketplace-Edison Research Poll, 30% of workers 55 and older aren’t confident at all about the prospect of finding a new job, if they needed to find one soon. That’s compared to just over 20% of workers overall who lack confidence.

Gary Burtless, an economist at the Brookings Institution, said older workers are less likely to get laid off. However, “once they’re laid off, [they] have to hope that the job market gets very robust, the unemployment rate drops very low, for them to enjoy a good chance that they’re hired again in a job that’s as good as the one they lost,” Burtless said.

Research from the Federal Reserve Bank of Boston found that older workers were about half as likely to find jobs during recessions than younger ones.

Age discrimination is illegal, but experts say it’s still rampant. Some employers worry health care premiums will be higher for older workers. Or that training on new technology might be harder. And, with the pandemic, there’s the added issue that older workers are more vulnerable to the virus.

That kind of discrimination can lead to something else economists see during recessions: earlier retirements. Economics professor Courtney Coile at Wellesley College said a wave of retirements can be dangerous.

“Your Social Security amount is going to be larger if you wait longer to start your benefits then those people who claim their benefits early,” Coile said. “They’re going to end up having lower retirement income for the rest of their lives.”

Those kinds of retirements lead to worse health care and higher poverty rates. So, Coile said, lawmakers should focus on policies to protect those forced into an early retirement because of a pandemic they didn’t see coming.