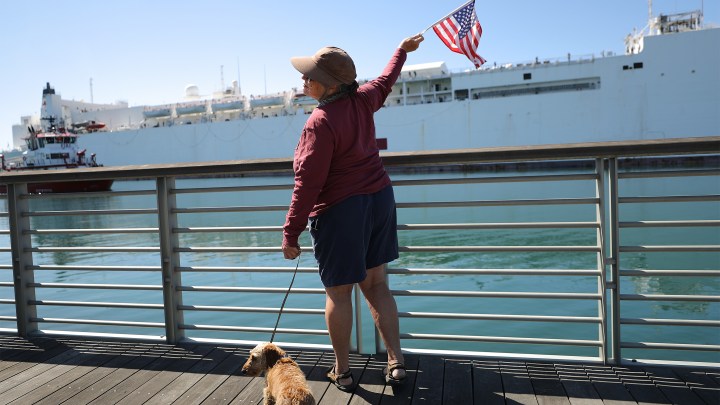 COPY
People 55 or older make up about a quarter of the labor force today. Mario Tama/Getty Images
COVID-19

People 55 or older make up about a quarter of the labor force today. Mario Tama/Getty Images
Listen Now

The economic outlook right now is uncertain, if not outright grim. A lot of groups are experiencing the financial consequences of the coronavirus pandemic differently, including older workers.

Lynne Lippmann is a clinical research specialist in St. Louis. Because of the pandemic, the university where she works needs to cut costs. Some people were furloughed, and Lippmann will have her hours reduced by half.

“When they cut the hours, one of the things we discussed was transitioning that over the next few months to retirement,” Lippman said. She’s 70 and was already planning to retire later this year. “It’s sort of just speeded up the process a little bit.”

People 55 or older make up about 1 in 4 workers in the labor force today. And, so far, they’ve experienced fewer job losses compared to their younger counterparts.

“Historically, older workers have been less likely to lose their jobs than younger workers,” said Richard Johnson, director of the program on retirement policy at the Urban Institute. “Older workers have more seniority that does tend to protect them.”

That’s the good news for older workers, but Johnson said when they do lose their jobs, “their unemployment durations are very long.” Johnson said during the Great Recession, people 62 or older who were laid off were much less likely than younger workers to ever get another job.

And that created another trend.

“There was a huge spike in 2008 and 2009 in people claiming their Social Security benefits early, right at 62, or just whenever that job happened to disappear,” said Matt Rutledge, a fellow at the Center for Retirement Research at Boston College.

Meaning people chose to take a smaller Social Security check for the rest of their lives rather than face months or years of potentially fruitless job searching.

And Rutledge expects another big surge in workers forced into retirement this year. Today, those that still have their jobs can find that even carefully planned retirement strategies may need revising given all the market turmoil.

“When they see their accounts fall down in value, it’s something that they really worry about whether or not they’re going to be able to retire the way they want or whether or not they can stay retired,” said David Amann, a financial adviser with Edward Jones.

So he’s checking in and reviewing plans.

He’s encouraging them to make choices while they still have options.